In the midst of its best season in years on the volleyball floor, Destrehan is turning heads – and so is its best player.

Junior outside hitter Ryley Boyne is Louisiana’s leading hitter – she had 335 kills following her team’s five set victory over Belle Chasse last week – and has established herself as one of the state’s most dominant players. Perhaps more impressively than her total, however, is she also ranks as the state’s most accurate hitter on a heavy volume of attempts, earning scores on 42 percent of her attempts. It’s helped establish Destrehan this season, the team now 17-6 on the year.

Boyne arrived at Destrehan as a freshman two years ago and quickly established himself as a starter and key building block for the Ladycats’ program under head coach Edward Borgstede, who was at the time newly hired. Since then she’s only gotten better, with a major leap occurring this season. The same is true of her team. 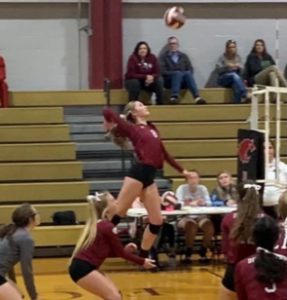 “We have really great chemistry on this team,” said Boyne. “A lot of us have been together since our freshman year, and there’s a strong bond there. We’re all friends off the court, and that helps a lot. It’s really exciting.”

She’s a confident player, but that’s a trait she said has been learned over the past couple of seasons. While her play stood out as a freshman, it took some time for her to feel like one of the team’s leaders. This season, she takes pride in that role.

“It happened as I grew up here. I felt like I became more of a leader … I didn’t have that confidence as a freshman,” Boyne said. “It feels good to have people look to you and you’re able to help them out.”

Even with that additional confidence, she said she never imagined blossoming into the state’s hitting leader.

“I’ve never experienced anything like this,” she said. “It feels great. I couldn’t do this without my teammates, though – all of my defenders, passers, hitters, and my coaches, too.” 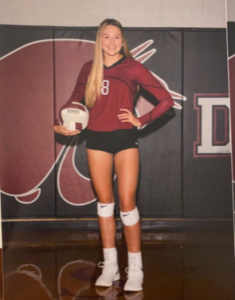 Making a deep playoff run would feel even better, though, for a player who began sharpening her skills as a six year old, when she started playing the sport. Boyne said she and her teammates began to sense this season could be a special one even prior to the first match of the year. The vibe was different and the excitement was heightened.

Like other prep sports, volleyball’s season was hardly guaranteed several weeks ago. When the green light came, Boyne said it brought the anticipation for the season to an entirely new level.

“You could see everyone so excited at practice, and there was just this energy around it,” Boyne said. “It felt so good being able to play and to be back on the court. For me, it felt like after all that work put in during the summer, it was exciting to be able to kind of show it off.

“Even when we’ve lost matches, there’s been this confidence that we don’t lose. We shake it off and get ready for the next game. Nobody gets down on themselves. We have that connection as teammates, and it really comes out on the court.”