It was Taco Tuesday at Lakewood Elementary School in Luling and Sheriff Greg Champagne along with his deputies dined right along side students as they kicked off a new initiative called “Eat on the Beat.”

The new program is aimed at promoting a mutually beneficial relationship between law enforcement and the school system that extends from students, teachers, staff and beyond to parents.

The Sheriff’s Office and School district collaborated on the initiative and launched it on Tuesday.

On-duty deputies get to eat for free in the elementary schools, giving law enforcement the opportunity to engage with students, faculty and staff to strengthen the relationship between school and community.

Superintendent Ken Oertling said the concept, which originated in Mississippi, was proposed by the Sheriff’s Office.

“It sounded great to us,” Oertling said. “We want to educate our children on the police’s role in policing and protection.”

Oertling also praised the School Board for supporting the initiative. Board President Dennis Naquin also had lunch with students.

Champagne emphasized the importance of growing relationships between the schools and community. While DARE officers frequent upper grades, deputies having lunch in the elementary schools will provide an “added safety factor” in lower grades. 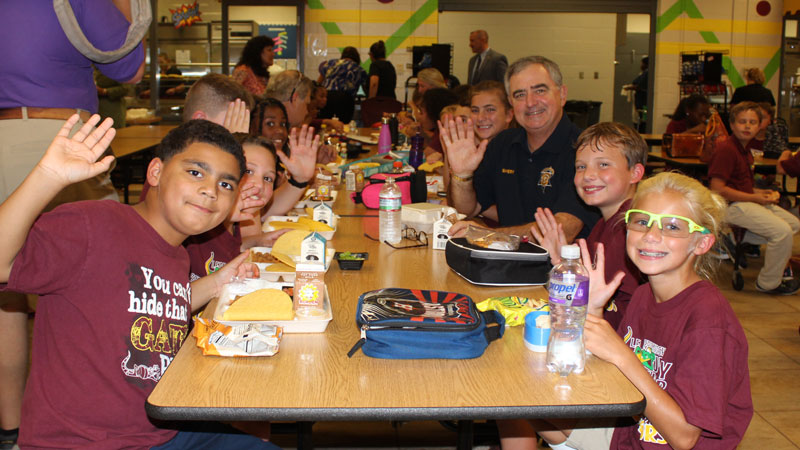 “You just never, never know,” the sheriff said of the need for the added presence.

While lunch typically lasts 30 minutes, Champagne said deputies will stay on campus for lunch, as well as circulate at the elementary schools. Deputies are also encouraged to walk the campus and meet with teachers and students.

Lakewood Elementary Principal Kelli Oertling emphasized the significance of building this relationship, as well as mentoring.

Champagne agreed, adding, he served as a mentor for 10 years.

Student Isharia Joshua, 10, said she established an “instant bond” with the deputy who visited with her class. Joshua said she shared her “secret recipe” for tacos with the deputy at her table.

“I felt safer, but at first I was a little nervous,” she said. “I made a special friend and a special bond.”

“I though it was really amazing,” Bedi said. “I felt really safe, because if an intruder came, we have the police there to protect us.”

Joycelyn  Sketchler Fonseca, age 94, passed away after a brief illness at King’s Daughters Hospital in Brookhaven, Mississippi.  She was a native of Algiers, Louisiana, a long time resident of Des Allemands, LA  and Brookhaven, […]

Suspects are innocent until proved guilty in a court of law. Arrests Sidney Jenkins, 31, of 4421 Skyview Drive in New Orleans, was arrested April 30 and charged with forgery (24 counts), illegal window tint, […]