Amy Chiasson has always had a very special place in her heart for her students. And for even the smallest milestones her students reached, she found the rewards immeasurable.

Chiasson recently retired after 32 years in St. Charles Parish working with special education students. Her home base was primarily R.J. Vial Elementary School, where she taught for 29 years. She educated students in the classroom for 13 years before, in 2000, becoming the parish’s specialized homebound instructor, going to the homes of students who have disabilities that render them unable to attend school in a traditional classroom setting.

Chiasson knew early in her life that this was the path she sought, and she never deviated from it. A friend of hers had a sister with disabilities, drawing Chiasson’s attention to what was ultimately her calling. She directed her efforts to earning her degree in special education at Nicholls State, achieved that goal and moved on to lending a helping hand and tender heart to those who greatly needed that attention.

She started her work in Lafourche Parish and then moved onto St. Charles Parish, where she remained for the rest of her career.

“It’s something I always wanted to do and felt I always needed to do. I love working with children, especially elementary students,” Chiasson said. “Working with students with significant learning disabilities, I’ve been able to get so close with these families and my students, especially those at homebound. They’re pretty much a second family for me.” 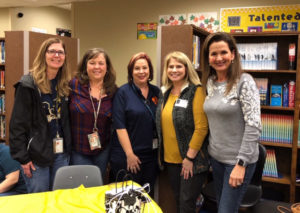 Of course, there were hurdles. Every student has different needs, and an approach that works for one student may not work for another. Chiasson worked with children in kindergarten and others in high school.

“Adapting was part of it,” Chiasson said. “Some students are non verbal, some are ambulatory. I made a point to be very structured and consistent in how I worked with each student, though, because for these kids repetition, a familiar structure, it seemed to help.

“I know at a certain point, each child can achieve at the best of his or her ability. So you’re trying to find what works with each individual, using different learning styles, tools and communication skills.”

Likewise, sometimes Chiasson’s own best efforts were simply directed at being there for her students and their families when the going was tough. A student may have had to leave a high school classroom for home courses after a surgery, for example. She acted not only as a teacher, but as a liaison between the school and the home.

“I’ve been lucky enough to be there and able to support the student. The parents have always been so welcoming into their homes,” Chiasson said. “You work with different people from different areas and from different backgrounds. You see the challenges they face from a direct perspective. You make really strong friendships … I know I tried to help them as much as possible.”

Some of Chiasson’s students were with her for as many as 15 years. So while Chiasson felt it was indeed time to walk away and into retirement, it wasn’t the easiest decision to make.

“I was ready, but it was also bittersweet, especially regarding the ones I’ve had for years,” Chiasson said. “But I know I have a relationship for life with those students. And I still keep in touch with my other ones.”