Command Sgt. Major Clifford Ockman Jr. is part of a family that has produced five generations of military servicemen, something he takes great pride in.

The St. Charles Parish resident has another reason to feel proud as well, as recently he assumed the role of senior enlisted leader of the entire Louisiana Army National Guard at a ceremony held at the Camp Beauregard post theatre in Pineville. At the ceremony, Sgt. Major Robert Stiefvater retired after 36 years of service and passed the torch to Ockman, who will now advise the adjutant general of Louisiana on all matters concerning the National Guard’s more than 11,400 members in the state.

“If you ever come into my office, you will see a collection of family photos depicting five generations of military family. It is one of the best Father’s Day gifts I’ve ever received,” said Ockman while speaking at the ceremony, moments after addressing his son, Cameron, who is a Staff Sergeant in the National Guard. “It reminds me of why I serve and motivates me to always do my best. That is what I promise you all, to always give you my best.”

Ockman enlisted in the United States Army in 1989 as an infantryman. In 1997, he transferred to the Louisiana Army National Guard and is currently an Active Guard Reserve Soldier. He is a veteran of Operation Desert Shield/Desert Storm, Operation Uphold Democracy, and Operation Iraqi Freedom III.

The decorated officer has served in various infantry positions throughout his active duty and National Guard career. His assignments include Airborne, Light Infantry, and Mechanized Infantry units. In December of 2005, he was appointed to CSM, and has since served as a CSM for the 1/141st Field Artillery Battalion, 199th Leadership Regiment, 256th Infantry Brigade Combat Team, 139th Regional Support Group, 199th RTI Regimental CSM, Commandant of the Louisiana NCOA, and most recently, as the Louisiana Army National Guard CSM. He has also served as the Senior Enlisted Advisor for the Louisiana Construction and Facilities Management Office and the Louisiana National Guard’s Reintegration Office.

“Thank you to Sergeant Major Stiefvater for your leadership, friendship and counsel. We will miss your mentorship,” said Ockman, following the transition ceremony. “To the soldiers and airmen, I will support you and your families, the unit goals, the command vision and provide the tools for training to maintain the readiness of both our state and federal missions.

“2,105 Louisiana Guardsman are spending holidays and months thereafter away from their families in defense of our country. And many more are standing by. You all represent what we stand for and define the meaning of selfless service.”

It’s Ockman’s own selflessness that some believe make him a perfect fit for his new role. 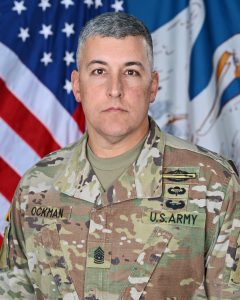 “I don’t think there’s a single person who has worked with him and not been blown away by his knowledge and professionalism,” said Chief Warrant Officer 5 Kevin Dares, Command Chief Warrant Officer of the Louisiana National Guard. “He’s extremely disciplined and dedicated in what he does in every position he’s had throughout the state, and it’s culminated in his reaching the most senior enlisted position in the Louisiana Army National Guard.

Dares said Ockman has always displayed a cool temperament, something that would serve anyone in this position well.

“Whether it’s a hurricane or overseas deployment, you can find yourself dealing with very stressful situations … you don’t always know what you’ll run up against,” Dares said. “He’s always maintained himself in this manner and he’s always stood out as a great leader. You have to be able to work with the lowest rank or civilian and with the highest ranking military or political entity in the state, and be level-headed when doing that.

“He’s someone that had a desire to serve his country as a ranger in active duty, and then working his way up to Sgt. Major in the Guard … he comes from a very patriotic family.”

After overcoming long odds to survive his battle with a rare condition, 14-year-old Grant Rechen was supposed to be through with all of the uncertainty, all of the anxiety. […]

Suspects are innocent until proved guilty in a court of law. Arrests • Brandon Hill, 28, of 1120 Paul Maillard Road in Luling, was arrested Feb. 3 and charged with possession with intent to distribute […]

Abigail Blair saw the vehicle her sons were traveling in, and feared the worst.

“I kind of collapsed … it was horrific,” the Luling mother said. […]