A little more than a month ago, Peter Woullard took his first steps in approximately a year after being hospitalized for months by a severe case of COVID-19 early in the pandemic, and while that news was good, he still had – and has – much work ahead of him.

As he continues to make progress, he and his family have had to continue to adjust to the realities of his current situation. One such example came earlier this year when his wife Patricia posted a GoFundMe page aimed at raising money to renovate the bathroom in their home to make it more accessible for Woullard – specifically, to install a walk-in shower because he could not step into their current tub.

Well, not so current, as it turns out – a Good Samaritan stepped in to make that a reality for the Woullard family. Larry Closs, the CEO of Max Home, became aware of Woullard’s plight and stepped in to help, offering to build the walk-in shower completely free of charge.

“They came by and (Closs) told me he wanted to help. They did the bathroom right there, that same day,” said Woullard. “Oh, I was real surprised. I wasn’t expecting any of that. They came in and got it all done and finished, all in a day’s work.” 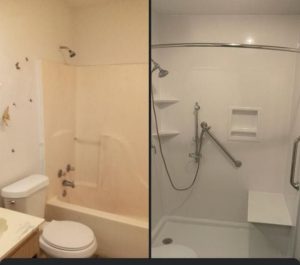 Woullard called it one of the highlights he’s experienced since being discharged from the hospital.

“Besides walking and being able to start doing some personal things on my own, it was definitely one of the best moments. I was so happy and excited,” Woullard said. “It felt really good that someone stepped up to help me like that. They didn’t have to. Just … I really just want to thank everyone that’s stepped up to help us so much.”

Last year, Woullard, 53, and his wife were two of the many healthcare workers to face what was an unknown, scary situation on a daily basis – both worked at St. Charles Parish Hospital, Peter as a behavioral health unit technician and Patricia as an operating room assistant. As such, both were regularly at risk to COVID exposure.

During a shift one afternoon, he fell ill suddenly – and unexpectedly, as Woullard arrived for work that day and recorded a normal temperature upon admission. But about two hours after wrapping up work with a patient, he began shivering. His temperature shot upward, and he was suffering from a high-grade fever with a recording of 103.

It ultimately caused him to spend nearly 30 days on a ventilator and the better part of five months receiving care in different medical facilities. Though he lived through the ordeal, he lost function in his extremities and had to relearn several day-to-day tasks – the ability to talk, to eat on his own, and has been in the process of learning to walk again. He suffered nerve damage throughout his body during his COVID fight and recovery.

Through hours and hours of physical and occupational therapy, he’s made steady improvements. He can now stand without assistance, and he says the focus right now is to regain his strength.

“I’m working a lot on my upper body strength with my arms as well,” he said. “Everything’s progressing well. It’s taking a little time. Everything takes time.”

His story got national attention, including a feature on CNN. He said he hopes his story has and will help others understand the danger of COVID and the importance of being vaccinated.

But, more than anything, he is grateful.

“Thank God I wasn’t one of the ones who passed away, because I could easily have been. I don’t want people to go through what I went through,” Woullard said.