Watermelon is plentiful and an especially sweet treat this year, making it one of the main features on the table for summer.

It’s also a fruit that is easy to prepare ahead of time and lends to even cooler treats that Landry said this year’s sweet crop would make even more fun. But its ease of use has likely lent to it also being what she called “an undervalued fruit.”

Watermelon popsicles can be made from the juice and even embellished with other fruit like bananas as a great snack for children, she said.

Wilson’s also used the juice with orange blossom water as a cooling drink, and the fruit has made a nice addition to a salad with other tantalizing additions like feta cheese.

But Landry’s best recollection of watermelon is when her mother served it with breakfast on occasion. 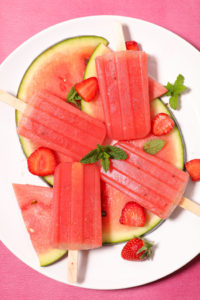 Denise Zeringue, who worked with the LSU AgCenter for 24 years, recounted how people made preserves out of the watermelon rind.

Zeringue, who worked with St. Charles Parish residents on making preserves, said she made the preserve.

“It’s to use that part of the watermelon and not just throw it away,” she said.

It was also a feature on her grandmother’s table.

The process is basic, involving removal of the red fruit and the green outer layer. The rind is cubed or sliced into strips and baked. The pieces are then added to a favorite preserve recipe typically including sugar.

Zeringue advised anyone substituting the sugar with a substitute sweetener like Equal not to do it because it becomes bitter. She did recommend trying Stevia. 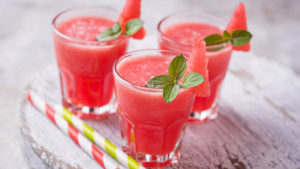 If cooked correctly, the rind pieces now preserved have been compared to eating candy.

J Bo Zeringue, a Taft farmer for nearly 30 years, said watermelons are abundant in St. Charles Parish, but typically brought in from other parishes or Mississippi. His own crop of melons didn’t do well in this year’s scorching hot temperatures and rainy season.

Sweetest watermelons are coming from Washington Parish, La., and Mississippi, but also coming from Texas, California, Florida and Alabama. Zeringue said.  He said they grow in these places like creole tomatoes grow in St. Charles Parish because of the soil.

“All Louisiana has diverse soils that produce a certain vegetable or fruit. For Pontchatoula, it’s strawberries,” he said. “This area has never produced a bumper crop of watermelons. The soil may be too rich.”

The parish’s soil is more suitable to crops like tomatoes, bell peppers, eggplant and squash.

“We’ve learned over many years what grows best in what part of the state,” Schmidt said. “That’s not to say that a backyard grower can’t grow watermelons and they do grow well.”

Destrehan had Hahnville’s number, but the Tigers turned things around on Tuesday night in their home district matchup with the visiting Wildcats. […]

On the James’ kitchen wall are the words, “Life isn’t a matter of milestones, but of moments,” a saying they’ve had there for 10 years and, in 2018, became the theme of their daughter’s salutatorian speech at Destrehan High School. […]

The St. Charles Parish Sheriff’s Office is seeking the public’s assistance in identifying a subject allegedly involved in a burglary reported on Dec. 31 on River Road in Montz. […]