Kelly Bradford Barrios parlayed her intuitions as a mother into something extraordinary – the Destrehan resident is the founder of Be the Light, an organization that is on a mission to empower young girls and women.

As part of Be the Light, Barrios assembles first period bags and delivers them to local non-profit agencies and schools. The bags are designed to provide the basics (pads, pantyliners and feminine wipes) plus a surprise item (lip glass, face glitter, scrunchie, etc.) to make sure that maturing girls have a positive and uplifting experience during a time of change in their lives.

“It was something that had kind of been on my heart for a while … a way to invest back in the community and the surrounding areas,” Barrios said. “I had a preteen at the time, and knowing she was about to go through the changes I talked to her and made her a bag to keep in her school bag in case she got her fist menstrual cycle at school. I didn’t want her to be embarrassed about being a girl and having a menstrual cycle.” 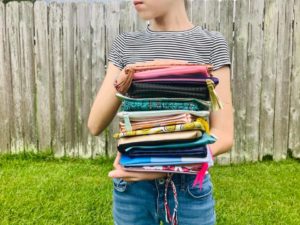 Barrios assembled bags and started to hand them out to school nurses in St. Charles Parish public schools and local non-profits after talking to her own daughter made her think that maybe the first period bags could be useful to other girls as well.

“It’s an honor to be a woman and this isn’t anything to be ashamed of,” she said. “We get to give the gift of life and this is part of it.”

Barrios said she hopes the project teaches her own two daughters, 13-year-old Madelyn and 8-year-old Olivia, some important life lessons.

“I just want to instill in my girls about giving back and realizing that we’re blessed,” she said. “We’re not wealthy, but we have a roof over our head and food and clothing … but not everyone has that … not everyone is handed that deck of cards.”

Barrios said Madelyn has also had a part in volunteering for the cause.

“I’m glad she’s getting to see me doing it and see all of these women in the area donate,” Barrios said of Madelyn. “She sits with me and helps me stuff the bags.”

Barrios said there have been many local businesses, including Glitter Over Nola and Sweet Rolls, as well as many local residents, who have donated items to her mission.

Barrios based the name of her organization – Be the Light – after the Bible scripture Matthew 5:16 that reads, “Even so let your light shine before men; that they may see your good works, and glorify your Father who is in heaven.”

The effort to shine light in the community has spread to more than first period bags, as Barrios has also curated makeup bags and donated them to A Safe Space of St. Charles. She is currently collecting purses, which she plans to fill with period and hygiene projects, to donate to the homeless women of the New Orleans Mission.

“Overall I want to sow seeds of love into the community and invite others into that process,” she said. “It’s all about empowering young girls and women in general. I really would like to get as many people involved as possible.”

To learn more about or donate to Be the Light, visit the group’s Facebook page.

Hahnville’s back was against the wall Friday night at home against rival Destrehan, which surged early in the second half to take a 44-31 lead. […]

After more than 50 years of entertaining crowds with his voice and musical talent, Luling native Robbie Matherne has found a new outlet to share his passion and he wouldn’t trade it for the world. […]

About Monique Roth 842 Articles
Roth has both her undergraduate and graduate degree in journalism, which she has utilized in the past as an instructor at Southeastern Louisiana University and a reporter at various newspapers and online publications. She grew up in LaPlace, where she currently resides with her husband and three daughters.
Website