John Emery smiled while surrounded by friends, family and his Destrehan teammates at last week’s early collegiate signing day, where he and four fellow Wildcats officially signed to play Division I college football.

It was a packed room at Destrehan for the school’s signing ceremony for the quintet, with Emery garnering much attention as he signed his letter of intent to attend and play for LSU. The five-star running back recruit is ranked the top senior rusher in the nation by ESPN.com, and his recruitment had a few twists and turns along the way: he committed to the University of Georgia before football season before decommitting in October and soon after announcing his intentions to sign with LSU.

Emery called it the right decision for himself, and said the opportunity to stay and play close to home was one of the ultimate determining factors. Another was what he felt was a clearer path to playing time at LSU vs. Georgia, where a team strength is its deep stable of top-rated rushers, both on the current roster as well as its projected incoming class of freshmen.

“I’m so blessed and thankful, but I’m really not satisfied,” said Emery, who rushed for 1,683 yards on 218 carries (7.7 yards an attempt) and scored 28 total touchdowns. “There are levels you have to reach in this game that I’m still striving for. But I’m happy to have finally made the decision and I’m ready to go … I thought it would be hard for me to leave and go out of state and felt like I’d be homesick. With LSU … this is home.”

Destrehan wide receiver Quinton Torbor is also headed to play SEC football, as he makes his way to Mississippi State. At 6-foot-2 and 185 pounds, Torbor was both a downfield threat and a bull after the catch.

“My first visit out there, I got a little glimpse, and I realized the next time out that it wasn’t just a one-time thing,” Torbor said. “They treat you like family and that was the case every time I went there … they like my versatility, that I’m able to play outside and inside at wide receiver. They liked my aggressiveness and how physical I get.”

DHS quarterback J.R. Blood is headed to Southern after leading the Wildcats for the better part of three years. Through that experience, Blood said he learned what it took to lead and find success as a passer.

“Short term memory,” Blood said of the best lesson he learned as he helped lead the Wildcats to two semifinal rounds in three seasons. “You move on to the next play, and through it all, you continue to fight for your brothers.”

He said Southern liked his ability to make all the necessary throws at the college level, as well as the way he can use his legs to get out of the pocket, extend plays and run for yardage. 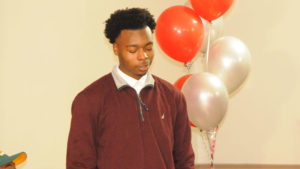 He also called the end to his Destrehan career bittersweet.

“You know it comes to an end eventually, but you never think it’ll come this fast. I’ve been blessed to be along for the journey,” Blood said.

Cornerback Dontrell Smith and linebacker Alex Huszar were cornerstones of the Wildcats defense and they are headed to Southeastern together. Both called that a major perk.

“It makes me more comfortable and it’ll make me feel more at home, to have him up there with me,” Smith said. “Really, everything about Southeastern felt right from the start.”

Huszar will be a second generation Lion student, following in the footsteps of both his mother and father who attended before him.

“I’m glad (Smith’s) coming,” Huszar said. “It just makes a good situation even better. My mom’s from Southeastern, my dad went there too … I just really like everything about it.” 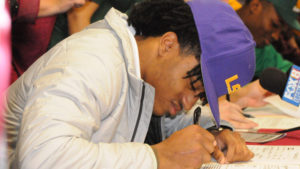 At Hahnville, meanwhile, wide receiver Jha’Quan Jackson’s signing with Tulane yielded his own crowd to see him officially join the Green Wave.

Jackson played both quarterback and wide receiver during his time at Hahnville, helping to lead the Tigers to the Class 5A state championship game in 2017. He initially committed to Southern Methodist before decommitting en route to Tulane.

“They never stopped recruiting me,” Jackson said. “That showed me they really wanted me, because I believe if a school wants you, they stay with it and don’t just stop talking to you,” he said.

He’ll be playing wide receiver with the Wave, who have told him they want him to play both in the slot and on the outside. Jackson said that appealed to him, as well as the chance to play close so family and friends could see him play live. 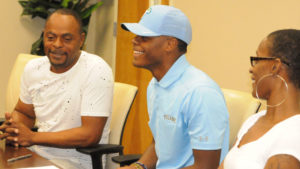 “In college football, if one guy goes down, another has to step up, so I have to be able to shift outside if they need me there,” Jackson said.