Justin Jefferson held up four fingers after crossing the goal line in the second quarter of his LSU Tigers’ national semifinal game against Oklahoma, cementing his name throughout the record books of both his school and the sport of college football as a whole.

In the first half alone, the Destrehan High School alumnus scored four touchdowns. On the game, he hauled in 14 receptions for 227 yards to go along with those four scores. Most importantly of all, his effort was among the most pivotal in propelling LSU into Monday’s national championship game against the Clemson Tigers.

It was only the latest triumph for a trio of brothers who established themselves as stars at Destrehan High School and share a truly rare distinction. Not only did all three – Jordan, Rickey and now Justin Jefferson – go on to star for major Division I schools, but the St. Rose natives did so at the same school, each an LSU Tiger.

Their mother and father were both former athletes, John Jefferson playing basketball for the University of Nebraska and his wife, Elaine, starring on the prep court. As one might imagine, they’re quite proud of their sons following in their footsteps. Each of their children played basketball growing up but would turn their focus to the football field.

“It’s a blessing,” John said. “We look at them and how hard they work … nothing comes easy. We’ve always tried to instill in them to give 110 percent in all that they do. Work hard and enjoy doing what you’re doing.”

He recalled his three sons working out together in a lot next to the family’s home as they grew up. It was there they sharpened their skills – and competitive fire.

“All three would go out and work out, compete with one another,” he said. “We’re a very competitive family. We’ve got that nature. And it’s great to see each of them find success. Sports, when you approach it from the right angle, it’s something that helps you in life.”

Jordan quarterbacked perhaps the most dominant Wildcats team in the program’s history, the 15-0 2007 Class 5A state champions. He was a perfect 21-0 as a starter over his final two seasons, his junior year abbreviated by injury. Jordan went on to start at quarterback for LSU, leading the Tigers to the 2011 championship game. 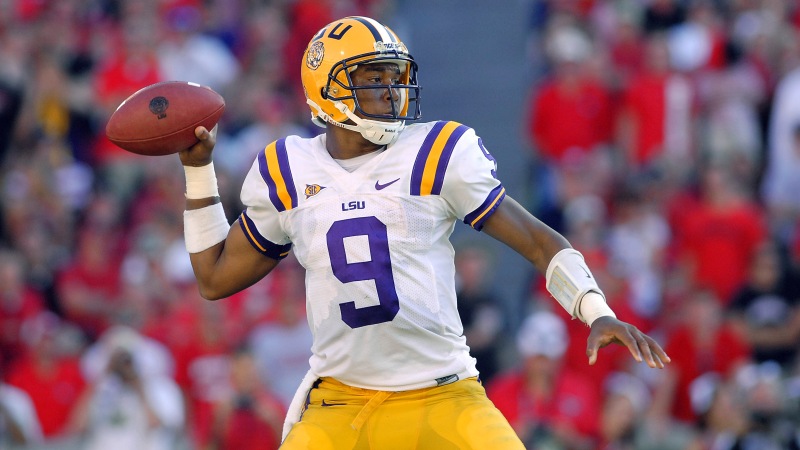 Rickey stood out as an offensive playmaker at Destrehan, leading his team in receiving while also posting stellar numbers as a returner. His athleticism attracted the Tigers, who converted him to defensive back.

“Jordan just continued to get better and better. He was a leader,” said Destrehan head coach Stephen Robicheaux. “He won a state championship here at Destrehan and we knew he’d be successful. Rickey, he’s a pure athlete who kept working. He had a bit of a setback with injury, but he went on to play safety at LSU … they call it DBU, it’s one of the best places in America to play defensive back.”

For Justin, the third of Destrehan High’s Jefferson brothers to play for LSU, he wasn’t as heralded early on in his prep career. He broke out late in his time at Destrehan after moving from his initial position, quarterback, to wide receiver. He didn’t sign on National Signing Day like many of his peers, as he still had work to do academically — upon completing a summer course, he would be eligible to play at the next level.

He knew he wanted to be at LSU, where he’d grown up in some ways, spending so much time at the school with his brothers who played there before him.

John said that Jordan was perhaps the first to notice Justin was beginning to blossom as a player. Justin grew from a 5-foot-7, 155-pound player as a Destrehan freshman to eventually round into a 6-foot-3, 185-pound prospect. As both his body and skills grew, Jordan saw his younger brother’s improvements firsthand.

“Jordan was able to spend a lot of time with Justin working with him …  he and I both saw him developing,” John said. “He’s getting taller. He’s getting that extra burst, strength and quickness. Jordan told me, ‘Justin’s putting himself on the radar and if he keeps working like he is, he can be a phenomenal player.’”

Justin had a tremendous senior season with the Wildcats, evolving into a go-to player. LSU noticed, and head coach Ed Orgeron made a promise: if Justin did what he had to in the classroom, he’d have a spot waiting for him with the Tigers.

“They saw something in him,” Robicheaux said. “They saw it early. LSU had the confidence in him to hold a scholarship for him.”

Said John, “I respect Coach O so much. He told Justin, ‘if you do right in school, I’ll save you a scholarship.’ And I applaud Coach O for allowing Justin time to do what he had to so he could get to LSU.”

Justin did his part and followed in his brothers’ footsteps just as he’d hoped. Once he arrived on campus, it wasn’t long before he truly blossomed.

LSU’s coaches began to notice. Former LSU assistant coach and current Arizona Cardinals assistant Jerry Sullivan told Robicheaux, during the latter’s visit to Baton Rouge after Justin’s freshman year, that he believed Justin would one day “play on Sundays” in the NFL.

Sullivan looks like a prophet now. This season as a junior, Justin has 102 receptions for 1,434 yards and 18 touchdowns. Last season as a sophomore, he caught 54 passes for 875 yards and six touchdowns. He’s been touted as a potential NFL first round draft pick.

Each of the three brothers shared great passion and drive, Robicheaux said.

“They all brought different things to the table when they were here,” Robicheaux said. “The traits they shared were that they put in hard work, had dedication and combined it with great athletic ability … to see three make it like they have, it’s pretty crazy. You hear about a pair of brothers, like the two that went to UCF (Shaquill and Shaquem Griffin) but I don’t know about three. It’s a great and rare thing for sure.”

He said personality wise, the three are different in many ways. Jordan was a quiet player who led by setting a strong example. Rickey was a prankster and kept things light in the locker room and lifted spirits. Justin, Robicheaux said, is something of a combination of the two.

But all put the work in, and the Jeffersons’ success rolls on because of it.

“With all three of them, their love of the game, the way they worked on their skill and craft, their fundamentals … they always worked hard and understood what it took to be successful,” Robicheaux said.

🏫 This summer Destrehan High School’s Kurt Hargis was chosen to participate in a pilot project developed by the National Humanities Center and the Ruth J. Simmons Center for Race and Justice at Prairie View A&M University. […]