Erica Randolph remembers the days when referees would shake the hands of her fellow coaches prior to basketball games, but stop short of her. Of course, she wondered why.

“They thought I was the trainer,” Randolph said.

She represents something of a rarity in her profession: a woman coaching males, as an assistant on the Hahnville High boys basketball team staff, where she’s helped navigate the Tigers to back-to-back appearances in the Class 5A semifinals in each of the past two seasons. She joined the program in 2017, arriving alongside head coach Yussef Jasmine after joining his staff at East St. John a year earlier.

“I knew she knew the game,” Jasmine said. “We were friends prior to coaching together … she was at Dillard when I was at Loyola, and we weren’t connected then, but I knew of her talent level when she was there. She’s so passionate about the game, so for me, there wasn’t any doubt as to what she could bring to our staff.”

There was an adjustment period, though she quickly developed a rapport with her players at both schools. As head coach of the freshman team coach, there were times early on in her tenure she would call a timeout and it wouldn’t be recognized immediately – Jasmine would have to step in at times to call it from the bench.

“They weren’t used to hearing that higher-pitched voice from the bench,” Randolph said. “I’d wonder, ‘why aren’t they hearing me?’ But to them, I just sounded like a fan’s voice.”

Jasmine said there were also some criticisms from the peanut gallery at first.

“At East St. John, we got a lot of kickback on that in the beginning,” Jasmine said. “We knew it was something that was kind of brand new to a lot of people. Sometimes, you bring a woman in to do what some men think ‘oh, I’m supposed to be doing that.’ It was a little pushback … you’d look over at the other bench, and I’ve seen the opposing coaches like, ‘I’m not losing to this woman.’” 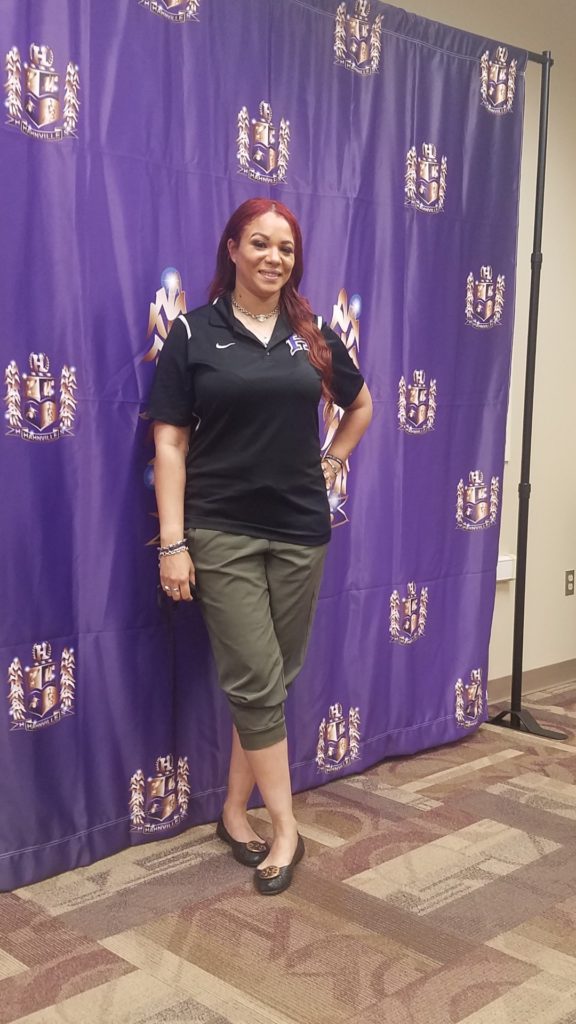 For Randolph, a three-time All-Conference guard and a four-year starter at Dillard University, those interactions were confusing.

“I actually didn’t understand it, because it’s not like I’m the very first to do this,” she said. “I didn’t get the scrutiny … I’ve played the game and so it shouldn’t be an argument as to whether I know basketball. I don’t look at it as ‘I’m here coaching boys.’ I just look at it as ‘I’m coaching.’ I won’t say there weren’t times where I got frustrated, because of course you get frustrated. It was difficult at the beginning.

“At some point, you ask yourself, ‘Is it because I’m a woman?’ But after awhile, I took that part out of it and tried to figure out ways to make things happen. Once I did that, everything became much easier.”

She became more confident and assertive on the sideline.

“After awhile, they stopped calling me ‘ma’am’ and started calling me Coach,” Randolph said. “I just had to reflect a little and make some adjustments until everyone became more comfortable with who I was and realized I wasn’t going anywhere.”

While Randolph learned to be comfortable with being uncomfortable during those days, one thing she never doubted was that this is what she wanted to do.

“The very first game I coached, I knew I belonged … this is what my design was, exactly my purpose,” Randolph said.

It would be hard to argue with the results. The Hahnville program struggled mightily prior to 2017, and Jasmine became the team’s fifth coach in six seasons upon his arrival that year. Hahnville has made the playoffs in each of the staff’s four seasons with the school, and has back-to-back district championships along with the aforementioned semifinal appearances.

“I’m taken aback by the success we’ve had, sometimes,” Randolph said. “The kids deserve so much credit. They just needed someone they knew would be there, standing behind them who will love you regardless, but also push that envelope for you to be successful. The wins will come with it.”

Jasmine said Randolph is a testament to what is possible when one steps out of their comfort zone.

“She’s a great example for young ladies, off the court,” Jasmine said. “I think people at the games look at her and know, hey, the guys listen to her, she knows her stuff … and it should show other people, if you can just get comfortable being uncomfortable, just for a moment, you have that chance to mature and suddenly, now you are comfortable and you’re on to the next thing.”