As St. Charles Parish President Matt Jewell fielded questions from young basketball campers at the Edward Dufresne Community Center last week, he was quite ready to answer the most inevitable query.

“They wanted me to be a little more acrobatic with my dunking, but I’m not as young as I used to be,” said Jewell, 31. “But I can still dunk a ball, so to see the smiles on their faces, it’s well worth it.” 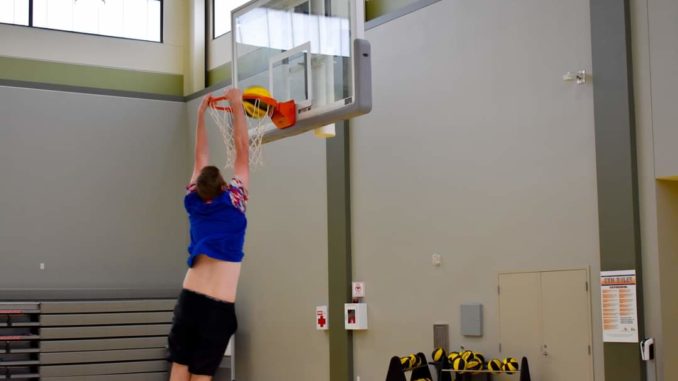 Jewell was there as a special guest for Hahnville High principal and former HHS basketball coach Dr. Brian Lumar’s basketball camp, where Jewell spoke to the campers about what he does, fielded questions and participated in drills to help the children sharpen their hoops skills. Jewell played for Lumar during the former’s time at Hahnville.

“It’s really fun when, every now and then, I get to do things like this,” Jewell said. “To work with some of our kids in the community, it’s always so much fun. They’re very passionate about basketball and recreation, so today I get to come out here, play a little basketball and teach about what I do and what our local government does.”

Lumar said he reached out to Jewell because he thought it would be a good opportunity for the parish’s younger generation to learn about a former athlete who went on to do great things outside of sports.

“To let them know who our parish president is and was, a former athlete, a guy who was tall and constantly hearing that question, ‘Do you play basketball? You must play basketball’” Lumar said. “He did so much more and you can see that. So just because you’re tall, run fast, jump high, it doesn’t mean you have to be an athlete. There are other things you can pursue.”

Lumar said that when someone has clear athletic traits or strong size for a sport, there can be a lot of peer pressure to pursue that avenue.

“He was a guy that always made his own decisions, never a follower,” Lumar recalled of Jewell as a student-athlete. “Basketball, in the end, turned out to not be his choice. He didn’t have the desire to keep that going, but he made the decision that was best for himself and not just the one that everyone was saying he should.” 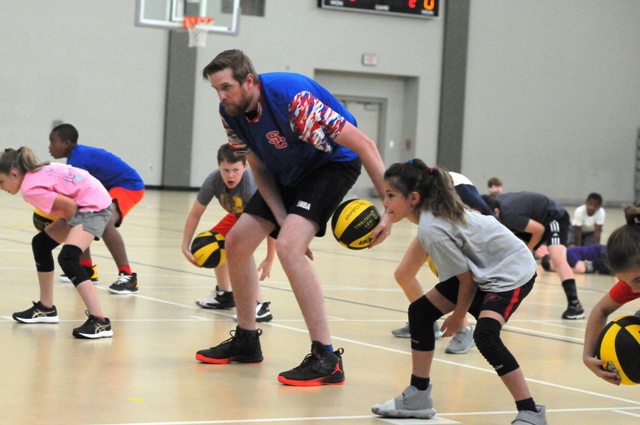 That said, when Jewell arrived, Lumar showed: once his coach, always his coach – immediately getting him involved in ball-handling drills.

“He was ready for me,” Jewell said with a chuckle. “He’d keep me out here all day and really make me sweat if he could.

“It’s great … we have a close relationship, so when he called me and asked if I’d be interested to come and talk to the kids and provide a unique experience for them, I said yeah, absolutely. I can’t thank him enough for the chance.”

Added Lumar, “I enjoyed coaching him (at Hahnville). He was a very coachable young man, and he’s always been very good with kids, so this was a natural fit. I thought the kids would enjoy it, and they have.”

As far as the camp itself, Lumar holds it regularly because despite his busy schedule as Hahnville’s principal, he believes the game imparts valuable skills and habits that carry far beyond athletics.

“It’s about so much more than basketball for me,” Lumar said. “It’s life lessons. I firmly believe basketball and the classroom correlate … if you’re lazy here on the court, you’re lazy in the classroom. This gives kids the opportunity to build relationships, work-ethic and so many things that can help them throughout their lives.”

Betty Laque Tregre, age 82, of Luling, LA, passed away peacefully in her home on Saturday, April 17, 2021, surrounded by her loving family. Betty is survived by her former spouse, Radford Tregre, her children, […]

The Hahnville girls track and field team placed eighth of the 28 competing teams at the Class 5A state track and field meet at LSU’s Bernie Moore Stadium Saturday, highlighted by a pair of top three finishes by Alexandra Johnson and another by Kevell Byrd.   […]