For not a tragic accident that cost him his life at the age of 16, Don Raymond would be fresh off celebrating his 68th birthday. But though his life was cut short, he left a lasting legacy as a phenom – and a pioneer – in prep athletics.

Born June 21 of 1952 to Alfred and Vera Raymond, the Hahnville native was the fifth of 10 children. In the athletic arena, he made his mark quickly once reaching Hahnville High School. Make no mistake, Raymond was no specialist – he competed in everything, earning letters in four different sports, football, baseball, basketball and track and field. On that last sport, his name lives on through the annual Don Raymond Relays track and field event held at Hahnville.

By the age of 16, Raymond became the first African-American athlete named to Louisiana’s Class 2A All-State football team and also the first African-American to letter in four sports. He helped spur the Tigers to win a state football championship in 1968, hauling in 36 passes and 12 touchdowns that season as one of his team’s star receivers. His 22-yard reception in the third quarter of Hahnville’s 14-7 state championship win over Central Lafourche set up the game-winning touchdown run. He arguably shined even greater on defense, as a cornerstone of the Tigers’ line at defensive end. Raymond also earned All-District and All-State honors in basketball and track and field.

He was reportedly on LSU’s radar before the unthinkable happened on March 30, 1969. On that day, Raymond and his girlfriend were traveling down River Road when his vehicle collided with another headed the opposite way. Raymond was the lone fatality. It came one night after Raymond competed in a district track meet – he finished first in each of the four events he participated in. His life was cut short, and the world never got to see what Don Raymond would do in his senior year. 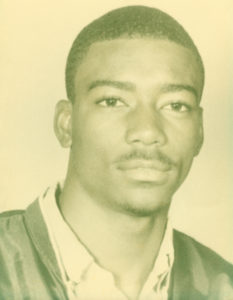 Ama author Glenn Singleton chronicled Raymond’s life in the biography “Crossing Over.” Throughout its text, those who knew Raymond were universally effusive in their praise of who he was both as an athlete and as a person.

“We were all just average compared to some of the things he would do playing football,” said teammate Mike Henderson, as quoted by Singleton. “He had exceptional speed.”

But to simply list his accolades would be doing Raymond a disservice. Without context, it displays Raymond to be a superior athlete among his peers. But he accomplished far more than that – Raymond made his mark when integration was in its infancy. He was Hahnville’s first black student-athlete, and as such his road was anything but easy.

He enrolled at Hahnville under the Freedom of Choice rule that allowed voluntary integration, transferring from Carver as a freshman. His decision to do so is pointed to by many as the major turning point for integration in St. Charles Parish.

In Crossing Over, Raymond’s football teammate Mike Henderson said that people were at times hostile to the former, “but he always maintained his composure and was very pleasant toward others … he was  the epitome of the student athlete and also a model citizen and leader.”

Singleton quoted another of Raymond’s teammates, Shelly Tastet, as saying “I just think God created the right person to put in that situation.”

Finally, Mike McCain may have summed it up best.

“I played beside a young man who was a trailblazer,” McCain said.

One School Board seat filled, another headed to runoff

The St. Charles Parish School Board has one new face – the District 4 winner – after Tuesday’s election, with a second seat – the District 2 spot – set to be filled in next month’s runoff. […]