Many avid golfers go their entire lives without ever sinking a hole in one.

The 86-year-old achieved number five on June 17 at Cypress Lakes Golf Club, sinking the shot on the course’s 6th hole, a par 3.

Milazzo said it’s been at least five years since her last one, and estimates she’s hit one “about every 10 years” since she took up the game in her late 20s.

“You know, I didn’t see it go in,” said Milazzo, who was golfing with her friend Peggy Armond on the day. “She said she knew I hit a good shot, but when I walked up to the green, I didn’t see the ball and thought, ‘Doggone it, I must have hit it off the green.’”

After a little bit of searching, her instincts began pointing to a far better result.

Milazzo was a good high school athlete who did her work on the basketball court. She’d never played golf until one day, her husband was ready to play one Sunday but couldn’t find anyone available to play alongside him. 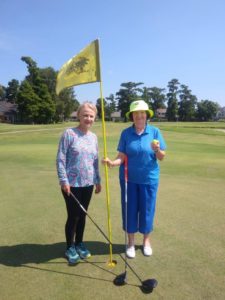 Her first hole in one came after just a couple of years playing the game. At the time, as she did for many years, she played sporadically whenever she could find time. Milazzo worked as a registered nurse, so that time was something of a rare commodity. Nowadays, she’s retired and is able to play a few times a week – she doesn’t have to travel far, as the ladies’ tee for the first hole of the Cypress Lakes course is a short walk from her front door.

“I’ve always liked it because you can’t complain about anything,” Milazzo said. “In a team sport, you can say things about this or that, but this is individual. If you have a bad day, you can’t blame anyone else. And when you play golf, you have to have a positive attitude. Some people you play with, when they have one bad hole, they get upset and it ruins their game the rest of the day. I’m not like that … I tell people, I think I’m better naturally than I really am. You’re outdoors, enjoy yourself.”

The hole in one is elusive and one of the most exciting accomplishments a player can secure. To have done it five times is unique, though at this point, she can almost feel them coming in a way.

“I kind of predicted it on two different occasions,” Milazzo said. “The first time actually came on a day I was playing pretty badly. I told the women I was playing with, ‘I’m playing so bad today, I guess I’ll have to make a hole in one,’ and I did.”

The second occasion came this month.

“(Armond) said it had been quite a while since I had a hole in one, and I said yeah, I’d like to make one more before I die,” Milazzo said. “Lo and behold …”

Yep. The very next hole.

Milazzo plays with the Greater New Orleans Women’s Golf Association. She’s the oldest member of the approximately 100 person group, but don’t let that fool you: you’re more likely to have to keep up with her than vice versa.

“I play fast. Nobody has to worry about me slowing them down,” she said.

She’s also won three times in tournament competition over the years – “My name’s on that trophy. I feel good about that.”

When people learn about her five-time feat, they naturally get excited, she added.

“At Cypress Lakes, all the men were very happy when I told them,” she said. “Years ago, that might not have been the case everywhere. Men were macho and wouldn’t appreciate a woman making a hole-in-one. But everyone’s been genuinely happy for me.”

Destrehan Plantation rolls out its own cane syrup and raw sugar, cookbook is next

A private label cane syrup and raw sugar are among the new and exclusive offerings of the Destrehan Plantation Gift Shop, and plans are now in the works for a cookbook accompaniment to the cane syrup. […]