Derrick Rawls has loved fighting as long as he can remember.

The Paradis native grew up watching the choreographed battles of the WWE, where his favorite wrestler Stone Cold Steve Austin ruled the ring. Spawned from that interest, he developed an appreciation of the burgeoning sport of mixed martial arts, and eventually began honing the craft of jiu jitsu.

“All these things I grew up with, anxiety, depression … it all kind of went out the window when I found the ring,” Rawls said. “I could go out there, be myself, perform and make my family proud.”

Now 28, the alumnus of Hahnville High School ranks as one of Louisiana’s top amateur bantamweight fighters after beginning his career with wins in each of his first three contests. That’s including a victory over rising star Shawn Ducre, who entered that fight also unbeaten with knockouts wins in each, all of which came in under a minute and 45 seconds.

That win last November was the biggest in Rawls’ young career, propelling him at the time to the No. 3 ranking in the state among those in his weight class. While Ducre was known for finishing his opponents early on, Rawls was the one who struck quickly here – he secured a guillotine choke that ended the fight by technical knockout just 23 seconds into the first round.

The win was an emotional one for Rawls. His mother passed away just two days before the fight, and he entered the ring with his father there to watch him compete.

“It was a special thing. It was … I was almost on autopilot, in a way,” Rawls said. “I just cried … I didn’t sleep before the fight. It was very emotional. I went out there angry. My dad came in the ring with me and we took a picture. It meant a lot.”

Rawls was eagerly awaiting his next fight when things were put on hold for COVID-19. With so much momentum at his back as he was living out a dream, the inability to keep his momentum going was difficult for him.

“I kind of get chills just thinking about that,” said Rawls. “I started to feel like people forgot what I was doing and how fast I was rising. I was ranked third after that last fight, but with the pandemic I dropped to six. It was crazy because suddenly I was gaining these fans, these followers and then it all fell off.” 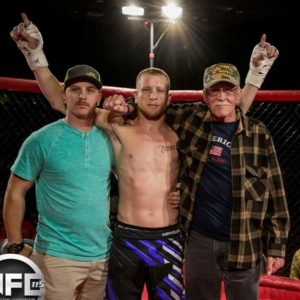 He won’t have to wait much longer for his next fight, however, and it’s a big one. He has a championship match for the bantamweight crown on Aug. 1 in the Atlas Fights promotion, the card set for 8 p.m. that night at Biloxi’s Mississippi Coast Coliseum. His opponent, Davin Scott, is unbeaten at 4-0.

A win there would further what’s been a rapid rise for Rawls since officially entering competition for the first time in May of last year. After this fight, he may go pro, which would be another milestone toward his dream.

“I’ve been working my butt off since quarantine started,” Rawls said. “I train two or three times a day. This is what I do. I’m out to prove myself again … I feel like I’ve gotta go out there and pick up where I left off.”

One of his favorite aspects of the sport is the chance to adapt to different styles. Scott, for example, is an accomplished wrestler. Ducre is a gifted striker, and Rawls’ first two opponents were strong in jiu jitsu, like Rawls himself.

“It’s fun to focus on different styles and gameplan for them,” Rawls said.

He has a bit of familiarity with Scott’s craft from a fan’s perspective to start with. One of Rawls’ inspirations, UFC legend and former welterweight champion Georges St. Pierre, was one of the greats among fighters with a wrestling base. Scott is not only a champion, but the fifth-ranked fighter in Louisiana among bantamweights. A win would be a significant step on what Rawls hopes will be a long career.

“I started kind of late, but I think where I’ve come from, and the life lessons I’ve learned, that’s the edge I have on a lot of people,” he said. “They haven’t faced adversity like I have. I want to make this a career … to be seen as a respected professional and to feed my family through this.”

After Hurricane Ida, Boutte’s Shawnya Williams was looking for a change in her career path. What she came up with adds up to the town’s newest business. […]