All season long, St. Charles Parish anxiously awaited the final week showdown between Destrehan and Hahnville, and the action proved worth that wait.

A stellar second half effort by Destrehan proved the difference in a back-and-forth battle, the Wildcats emerging 36-23 victors over host Hahnville at Tiger Stadium Friday night, securing the District 7-5A championship – and parish bragging rights.

Tyler Morton had two interceptions and a fumble recovery and Razan Keller rushed for 227 yards and scored three touchdowns to lead Destrehan (7-1 overall, 6-0 in district).

“We made a few mistakes early … but when the second half came, we came together as a group,” said Keller. “Once we realized, ‘We’re Destrehan. We stick together,’ we came back in the second half, fixed our mistakes and just dominated.” 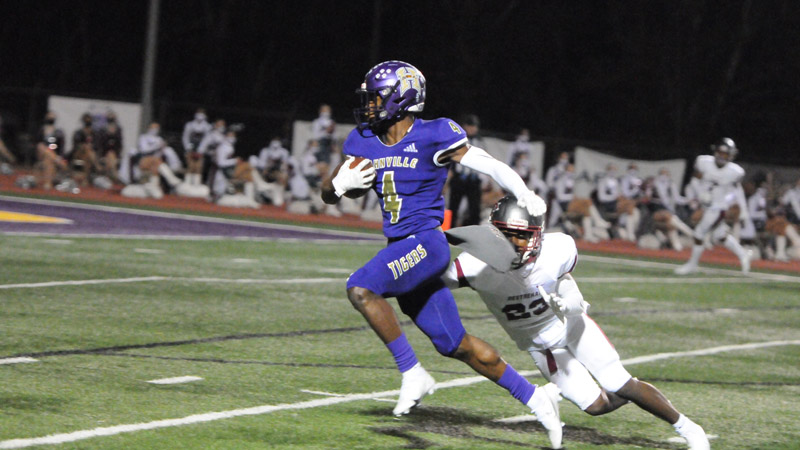 Said Destrehan head coach Marcus Scott, “We were giving them short fields in the first half instead of taking care of the football. In the second half, we came out to establish the line of scrimmage on both sides of the ball … we played to our strengths. We have two big running backs, both over 200 pounds, and a young offensive line, but one that’s big and physical. We took advantage of that.”

It’s the seventh consecutive win for Destrehan, and its third straight win in the series with Hahnville. For the Tigers, it will need to find a way to bounce back after two straight losses. Destrehan will very likely host its first round game, while the Tigers will be on the road in round one as the playoffs start next week.

Hahnville got on the board first on a 25-yard run by Trey LaBranch, who scored at the 5:58 mark of the first quarter to push HHS up 6-0.

Destrehan had an immediate answer, Jai Eugene capping the ensuing drive with a 1-yard keeper run set up by a punishing Keller run that looked to be stopped before Keller barreled through several defenders. DHS led 7-6. 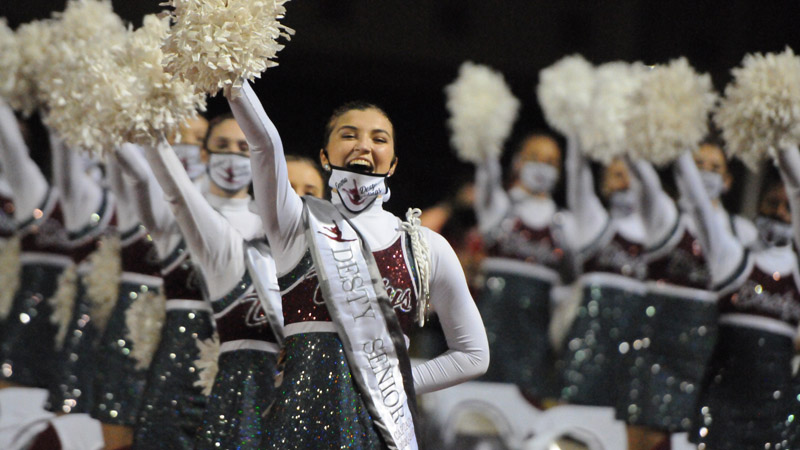 “I tried to hit them in the mouth early,” Keller said, “and wear them out, make them back down from there.”

Hahnville’s next big play came on the defensive side of the ball, as Taji Sullivan recovered a Destrehan fumble near midfield. Hahnville drove down and cashed in on a Naquin pass to Collin Zeringue for a redzone touchdown, making it 13-7 with 7:13 left in the first half.

But it was a costly drive for Hahnville, as the Tigers’ leading rusher Trey LaBranch went down with a foot injury prior to the score.

Hahnville kept applying pressure, though. A fourth down sack of Eugene by Cincere Simmons forced a turnover on downs. Hahnville drove down to the Destrehan 3-yard line – a fourth down conversion on a Naquin pass to running back Cole Villasenor on a wheel route extended the drive – before Destrehan’s defense held, and HHS kicker Tate White booted home a field goal to make it 16-7.

Destrehan rolled right down the field to start the second half. Several strong runs up the gut resulted in a touchdown when a fumble at the goalline was recovered in the endzone by DHS, cutting the lead to 16-14.

Hahnville extended the lead on the next drive, capped by Andrew Naquin’s 30 yard scramble for a touchdown to make it 23-14.

Destrehan ran the ball over and over down the field on its next drive, Keller finishing through contact for his first touchdown of the night, making it a 23-21 Hahnville lead. Morton followed up by forcing a fumble, and his fellow senior made good on the turnover again when Keller scored again on a 10 yard run – and added a two-point conversion – to make it 29-23 early in the fourth quarter.

Hahnville needed points, but Destrehan forced a fourth down just past midfield. Naquin lofted a pass to the sideline, but Morton forced his second turnover in as many drives on an interception to give his team the ball back. 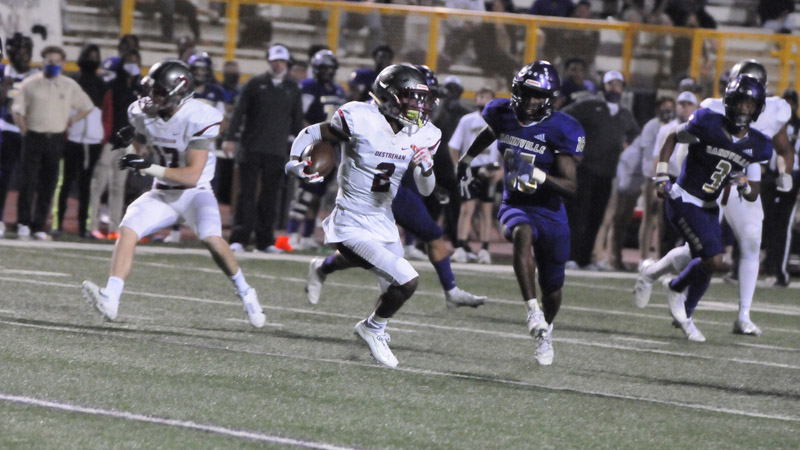 “We’ve been in games like this before,” said Morton. “We made adjustments coming out after the half … we went straight man-to-man and picked it up from there. It’s a real big win. We’re the district champions, and we knew we had to beat Hahnville to make it happen.”

Destrehan closed the deal from there. The Wildcats marched for more than seven minutes, Keller scoring his third and final touchdown of the night with 34 seconds left to make it a 36-23 final.

Hahnville head coach Daniel Luquet said the Tigers brought all of the intensity it needed in the first half to stand up to its rival in the high-stakes game, but couldn’t match that effort in the second half.

“We’ve got to learn to play with that same intensity (for four quarters),” Luquet said. “We couldn’t get into a shootout with them. We stressed that this week … a defense like that, you’re not going to score enough to win in a shootout … playing a good defense like that, they’re going to figure things out eventually.”

“And we’re going to have to expect that moving forward, because teams are going to do that to us,” Luquet said.

Luquet said he could not yet provide an update on LaBranch’s injury, and that the senior back would see a doctor on Monday to determine his status. Luquet said losing LaBranch on a night the back was playing as well as he was didn’t help the Tigers’ cause, but also expressed confidence in Villasenor, were the team to have to turn to him. 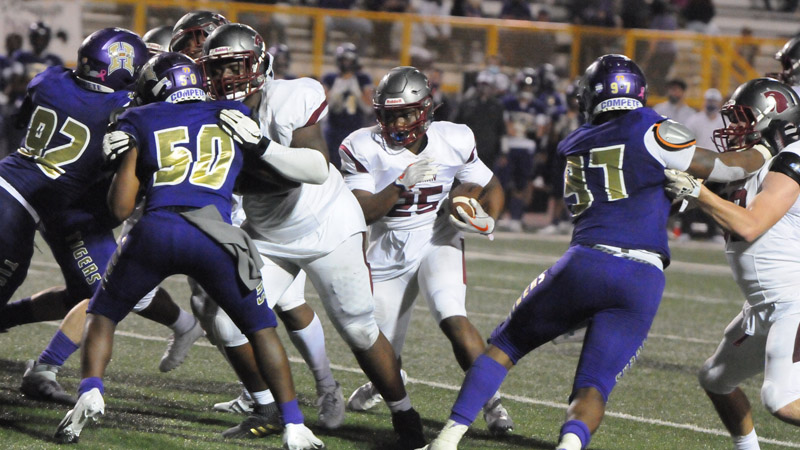 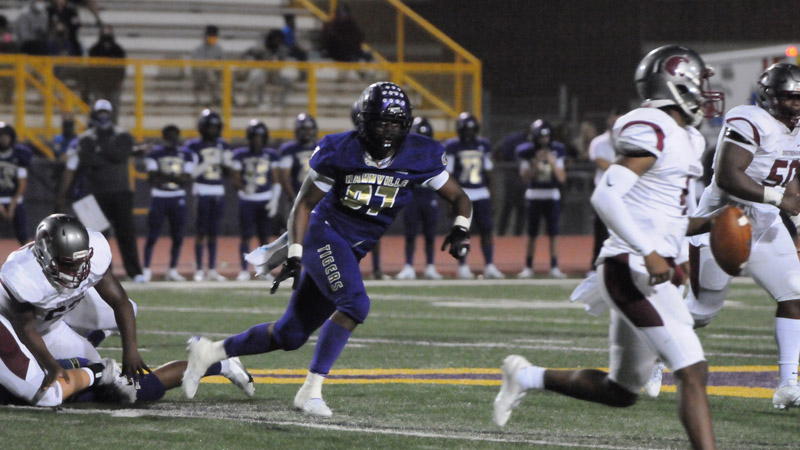 🏫 This summer Destrehan High School’s Kurt Hargis was chosen to participate in a pilot project developed by the National Humanities Center and the Ruth J. Simmons Center for Race and Justice at Prairie View A&M University. […]