While Reece Roussel and the Eastbank baseball team got the bulk of attention for their run to the Little League World Series championship, another St. Charles Parish standout on the diamond made her own mark on the national stage, along with her teammates.

12-year-old Ava Burkett of Destrehan was a member of the Eastbank softball squad that made a run all the way to Portland, Oregon for the Little League Softball World Series, finishing as national runner-up. It was the team’s second straight top three finish at the LLSWS, after placing third a year ago.

Burkett, a 7th grader at Harry Hurst Middle School, played shortstop and batted cleanup for the team, leading the tournament in doubles.

“It was pretty amazing,” Burkett said. “Just being able to play my favorite sport with all my best friends. I’m 12, and I know not many people ever get the chance to do that. It was such a great time.”

On the way to Portland, Eastbank captured the Louisiana state softball tournament in Vidalia and the southwest regional tournament in Waco, Texas.  The team was undefeated through state and regionals, which included twice beating a highly competitive Texas west team.

She said the team’s performance in the Waco tournament started to give the Eastbank players an inkling they were on the verge of some special things.

“I felt like, ‘wow, we really just did that,’” Burkett said. “We’re headed back to Portland. We were really focused on winning the championship. It doesn’t always end that way, but we gave ourselves a chance and I don’t think anyone has regrets.” 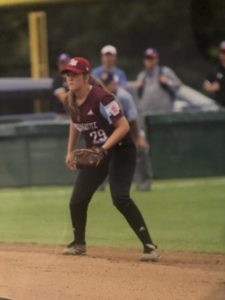 The World Series competition included teams from Pennsylvania, Hawaii, North Carolina, Iowa and host Oregon, as well as four international teams from Canada, Mexico, Italy and the Philippines. Eastbank’s only loss was to the eventual champion, Southeast/North Carolina.

Burkett’s played softball since she was five years old. She never thought it would lead to her making new friends around the country, and even internationally.

“I asked who she was texting one day,” said Ava’s father Darren, “and she said ‘that’s my friend from Canada.’ ‘How’d you meet someone from Canada?’ ‘From the Canada National Team.’ To create that bond and come home, still have it … they talk pretty much every day. It’s really greatest thing about it and something a 12-year-old almost never gets the chance to experience.”

After a rare district championship sweep by the Hahnville boys and girls track and field teams and a strong showing at regionals, the Tigers take aim at bringing home some hardware Saturday at the Class 5A state track and field championship meet at LSU’s Bernie Moore Stadium. […]

Adopt a Senior returns for Class of 2021

Throughout the storm that was 2020, there were some shining examples of strong community. The Adopt a Senior cause was one such instance – and as it turns out, it wasn’t a one-and-done practice. This […]

Suspects are innocent until proved guilty in a court of law. Arrests • Donnie Glynn Jr., 1120 Creswell Ave. in Shreveport, was arrested April 8 and charged with illegal carrying of weapons. • Shane Bourgeois, […]