After going the distance on the mound for his team, Hahnville pitcher Collin Zeringue seemed to have plenty of spring left in his step.

“I could have gone three more (innings),” Zeringue said with a smile.

Perhaps he indeed could have, riding high on the emotion of the Tigers’ 5-1 victory over Destrehan Wednesday, avenging a loss to the Wildcats only two days prior. The victory earned a split in the rivalry series for 2021 and allowed Hahnville to stay on track for a potential District 7-5A championship.

There’s plenty of work left to do on that front, as Wednesday’s game was Hahnville’s second of a five game week. The Tigers will face district co-leader Thibodaux twice, on Thursday at home (4 p.m.) before hitting the road for a Friday night battle (6 p.m.) and then will wrap up the regular season Saturday at home against Terrebonne (1 p.m.) The heavy week of play is due to several rainouts earlier this season. If Hahnville wins all three or sweeps Thibodaux, it is outright District 7-5A champion; with two out of three, it will at least earn a share of the crown.

But the first order of business was Destrehan – and, as always, they had the Tigers’ undivided attention, and vice versa. 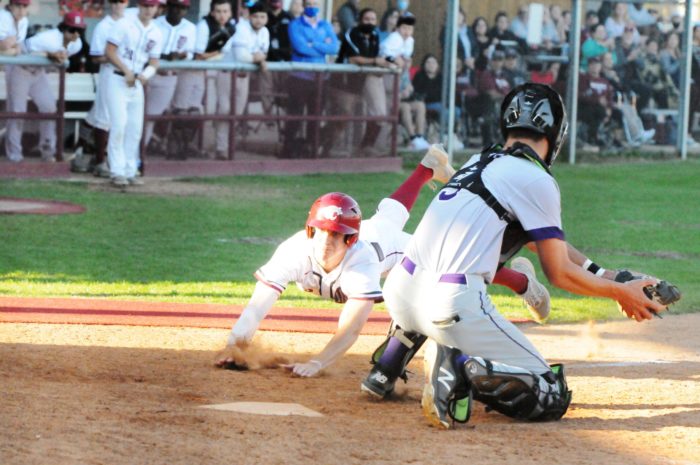 “This one was a lot bigger for me. I played with all these guys in middle school. I’ve played on their team … I’ve been knowing them forever,” said Zeringue. “It’s a really big game and to come out and get it done, it’s huge.”

Zeringue going the distance in a strong performance was vital for not just the day’s result, but it also allowed the Tigers to rest the remainder of its staff with three consecutive days of play to go.

“Having Collin out there, the most experienced guy on our tam, a leader on our team, was huge,” said Hahnville head coach David Baudry. “I felt so comfortable I let him call his own game. He and Mason (Long, Hahnville’s catcher) got together on that. He’s a competitor and he knows how to pitch. He did a really good job limiting their opportunities and making big pitches.”

Baudry said at one point in the sixth inning, he asked Zeringue if it was time to call upon the bullpen – Zeringue got to make that call too and said he could finish the job.

He got plenty of help, not just from a lineup that generated five runs, but in the form of several strong defensive plays, including a double play to end the game when centerfielder Connor Acosta caught a line drive and threw a rope to first to pick the runner and end the game.

“I thought our defense was stellar in both games. We turned three or four double plays, and at the end, Connor Acosta was going to throw that ball,” Baudry said. “It’s a testament to the resilience of this team. It’s been an up and down year at times, but they fight, fight fight. They didn’t feel they gave their best effort Monday, so they got together and today they did just that.”

Talan Theriot went 3-for-3 with two runs scored and an RBI for Hahnville. Aiden Machado also collected three hits, going 3-for-4 with an RBI. Ethan Chacon went 1-for-3 and drove in two runs.

Zeringue went seven innings and allowed one earned run on seven hits. He struck out three and walked three.

Cameron Dufrene led Destrehan offensively, going 2-for-3 with an RBI. Noah Simon reached twice, on a single and a walk, as did Seth Kenney, who drew two walks.

Hahnville (17-12, 8-1) struck first in the second inning on a Theriot RBI single to left. After four consecutive Tigers reached base to start the inning, Chacon drew a based loaded walk to force in another run. Colin Galland made it 3-0 on an RBI single to right.

The Tigers added a run to the lead in the third on a Machado line drive up the middle. In the fifth inning, HHS rounded out its scoring on Chacon’s RBI double to right.

Destrehan (18-11-1, 8-3) scored in the sixth inning on Dufrene’s RBI single to right. Riley Cardinal followed that up with a single, but Zeringue got a flyout to quell any rally.

DHS head coach Chris Mire said as much as things seemed to line up for his team two days earlier, this was Hahnville’s day.

“They did a good job getting their leadoff guys on base and putting pressure on us. They got the big hit when they needed it,” Mire said. “I’m disappointed in the outcome, but I think the team that played the best won both days, and they were the best team today. I thought we missed some chances to make things interesting, make it a ballgame late. Collin did a great job mixing it up on the mound and making our life tough on offense.”

Hahnville fought back, surged after slow start in 1st season under Schulz

Todd Schulz called his first season as head coach of Hahnville a great experience with a special group of players.  […]