Sends them free of charge to fanatics

Nicholas Carbo has always been a huge fan of the New Orleans Saints.

The Luling man has hung with his team through thick and thin, believing as many do that the team has a symbiotic relationship with its home region and fans. So when the chance arose to help other fans express their fandom, he jumped at the opportunity.

He and his friend and fellow Saints fan Joe Rohaley — AKA “Saint Vader,” a costumed Superfan of the team — are among those who have combined to make and ship Saints “fan masks,” sending them out to fellow fanatics of the team free of charge.

“I really like the idea of being able to assist with the masks and seeing the passion of Saints fans and helping them express that,” Carbo said. “I want to help fans have something cool and creative that you can’t really get in the store.”

Carbo and Rohaley created a GoFundMe to collect funds to purchase supplies for the masks, which raised almost $200 more than its $500 goal within 13 days of its Jan. 6 posting, much of the money raised leading into the Saints’ second round playoff game at Minnesota.

The black and gold masks, which are each decorated and colored in its own unique way, are reminiscent of those worn for Mardi Gras, which Carbo believes gives them hometown flavor. People have responded with zeal, as Rohaley noted the group has close to 300 masks on order.

“I think what makes them so popular is the fact that it’s sorta like a symbol of what the Saints are,” Carbo said. “They’ve had so many up and down seasons. The fact the masks double as Mardi Gras style masks, (representing) the comedy and tragedy, putting that together. We are New Orleans, we are Saints fans, and it kinda pulls it all together.”

Rohaley said the genesis of the idea was the desire to find a way to give back to the fan community.

“I didn’t want to charge a price … it blew up like crazy,” he said. “We have like 100 masks on order. We’re not making any money off it. Every one is different.”

Rohaley, who designs the masks, has become a well-known figure around the team’s fanbase, known for his Darth Vader-inspired costume. He’s made appearances, visited hospitals and does what he can to make a positive impact wherever he goes.

This project has been beyond what he envisioned.

“We’ve had orders from all the way up from New Hampshire,” he said. “It’s been phenomenal.”

The masks are bought in bulk, then are sanded down, primed and covered in black or gold. He uses masking tape en route to creating each mask’s design and also adds stickers, such as those representing the Fleur-de-Lis.”

For both men, the team represents more than fandom.

“After Katrina, especially, the team has been such a big part of who we are,” Carbo said. “We’ve been through so much, much like the Saints. We’ve seen them build and rebuild as a team as we have as a city. They’re such an inspiration even 13 years after the tragedy.”

And as one might guess, the Saints’ stunning loss at Minnesota hit especially hard.

“I still haven’t recovered,” Rohaley said. “It is what it is, a game that doesn’t end until the clock hits all zeroes. It was the same the other way when we played the Redskins this year. 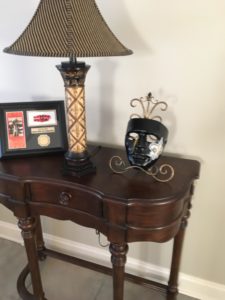 “But, I know it may sound stupid, I think that loss will only fuel them for next year. As much as it hurts, I know we have a phenomenal team, both on and off the field, and they’re going to be so competitive and hungry next year.”

Carbo echoed that positive outlook, refusing to let the painful loss taint a successful season that brought so many high points for its fans.

“We were hanging out at (a Karaoke bar) after the game, and after the loss every person got up to sing. And I sang “Don’t Stop Me Now,” and for the last line, I said even with a loss, I’m still havin’ a good time,” Carbo said. “I’ve supported this team all my life and I don’t ever plan for that to change.”