Nathaniel Moss called the end of his time at Hahnville High School bittersweet.

The school is where the senior learned to commit himself to self-betterment and to the service of others. However, those lessons are exactly why he is ultimately ready to move on.

“Seeing what is possible is so exhilarating, so I know I need to go. I just wish I didn’t have to.”

A devoted carpentry student and a group commander with the school’s ROTC program, Moss looked at both ventures as ways he could find meaning in his world and push himself toward his potential.

Moss has excelled with both activities.

His carpentry expertise propelled him to first place in that event at the recent ABC trade skills competition in St. Rose. He’s also used those skills to help others, such as a project he volunteered with for Habitat for Humanity that saw he and his fellow volunteers construct 20 bird houses for endangered species in a wildlife preservation.

“Carpentry teaches you so many  things, but also helps you to serve the community, and that’s the great thing about it,” Moss said. “It’s been a passion of mine. I feel like I haven’t necessarily learned as much or improved myself as I should have in school. But getting out there in the real world with a trade is important. I looked at a lot of industrial arts programs here, but I chose carpentry as a foundation for self-improvement.”

“Seeing what is possible is so exhilarating, so I know I need to go. I just wish I didn’t have to.”   — Nathaniel Moss

He joined the ROTC as a way to set himself on a positive track. He said through his four years with the program, he learned how to lead and built his core values.

Moss credited the ROTC’s upperclassmen when he first joined as inspirations.

“We did a drill banquet at the end of the year … we gave some awards to the underclassmen. Listening to them tell their stories and talk about how they look up to us and how we’ve helped shape them in the long run, it was really heartwarming,” he said. 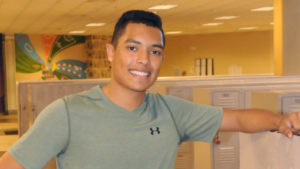 But the most heartwarming experiences he enjoyed while at Hahnville came when ROTC had the opportunity to work with U.S. veterans, such as a Veteran’s Day event the corps visited this year.

“We presented colors and talked to all the veterans there … watching so many people cry, and so many people who care about them,” Moss said. “To show them we haven’t forgotten … it was one of the proudest things I’ve had the chance to be a part of.”

Moss himself, in fact, plans to enlist in the Air Force after graduation, and will also enroll at the University of New Orleans to further his education.

He also plans to continue to grow as a carpenter, a pastime he pursues in his own time away from the classroom.

“The things we do in the classroom, mostly focusing on framing houses and industry … I like to do cabinetry and nice precision work at home,” Moss said. “To me, it’s like an art. It may not be a traditional form of art like music or painting … but you can mold it to be anything you want to be.”

Hahnville grad dominated on the mat and football field