Have you solved the mystery?

The cartoon icon Scooby Doo is instantly recognizable to people young and old, a character that has endured for more than 50 years. So when a certain bright, colorful vehicle began taking to the roads of St. Charles Parish late last year, it may well have felt like the “Scooby Gang” had sprung from the small screen to real life.

The Mystery Machine could be just around the corner.

Photos of the decorated SUV in different areas of the parish began circulating on Facebook recently and commenters shared where they’d seen it last –one on Apple St. in Norco, another noted an appearance on River Road. Another shared a short video clip of the Machine rolling down the highway.

The man behind the wheel – and behind bringing the idea to life – is Chris Bourg of Bourg Signs, the longtime Norco family business his father Robert established in 1961. The idea was born from his children’s desire to step up their game in the annual Trunk of Treat school event. 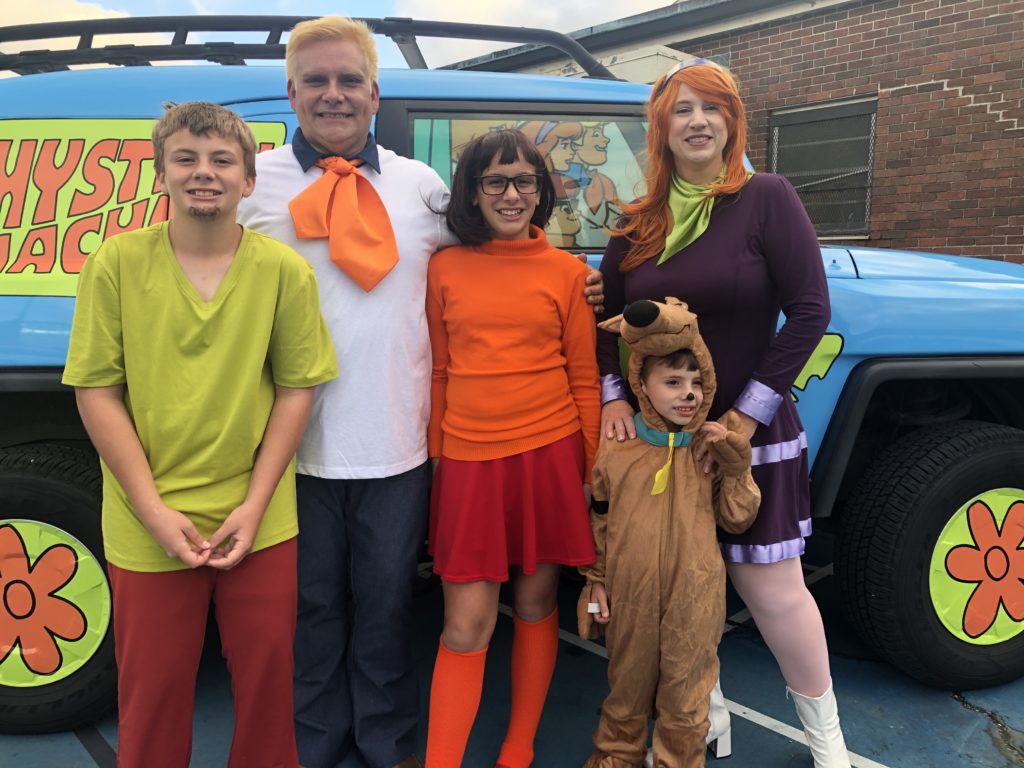 “We started doing Star Wars, then Lord of the Rings and then the Addams Family, which was a hit,” Bourg said. “We came in second place for that one. So this past year, we wanted to go all out. We have three kids and we’re trying to find the right fit to do costumes and everything. And then I thought, ‘Hey, I can wrap a car.’”

The family arrived at Scooby Doo as their theme, and Chris went to work to put the idea over the top. The week of the event, he estimated he spent 20 hours transforming the vehicle from silver to blue, then adding the logo, accents and all the bells and whistles to match the look of the original cartoon.

“We researched it,” Bourg said. “The blue is very close (to the cartoon Machine’s color). In the wrap category, you’re a bit limited with maybe 100 colors or so. With our full color printer, we can match it with other colors. My sister designed it for me.

“The end result wasn’t perfect, but it was a big hit. Everyone loves it. I get so many smiles … big smiles. It brings back childhood memories for people, and it’s fun.”

Those smiles keep on coming. The original plan was to shed the look after the Trunk or Treat event. His children weren’t so interested in Plan A, as it turned out. 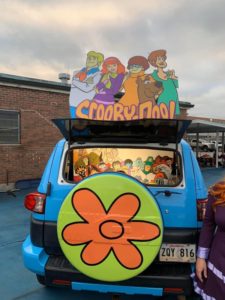 “They didn’t want me to take it off,” he said. “I thought it would be funny to keep it around, so I’ve been driving it for awhile now. Drive it to Christmas … it’ll be fine and we’ll move on after. But they wanted to keep it. So we’re planning on keeping it for a little while. My son’s 13, and several years from now, we’ll turn it over to him.”

It’s caught some looks elsewhere as well. Bourg spent some time in Lafayette recently and quipped his ride “was the talk of the neighborhood.”

“Kids are coming by, sitting in front of it and taking pictures. People come up to you at gas stations and ask, ‘Can I take a picture with it?’” Bourg said.

It’s also made him a go-to call, given recent events. With the number of small “parades” held to celebrate the birthdays of local children, the Mystery Machine has been a welcome addition and extra treat.

“I’ve done so many of those,” Bourg said. “Different neighborhoods, even out at the Lakefront … my wife works at East Jefferson Hospital and we’ve done some (for her coworkers’ children) and of course our St. Matthew’s family … a lot of them want it as well.

“With COVID and all that’s gone with that, people have been stressed out and on edge. This has been a nice little highlight.”

A source confirmed today that Brian Lumar, the principal at Hahnville High School since 2018, is the subject of a current investigation with the St. Charles Parish Sheriff’s Office. […]

Janella “Jeanie” Becnel Smith, age 92, passed away on April 9, 2021. She was a native of Napoleonville, LA, and a resident of Independence, LA. She was a retired hospital dietician and had also worked […]