A Luling house caught fire on New Year’s Eve after freezing winds apparently carried lit fireworks next to a window where it exploded, shattered the glass and set a six-year-old boy’s room on fire.

“It was an accident with fireworks fired in the neighborhood in Willowdale Subdivision,” said homeowner Ashley Ramirez. “One of the fireworks went through my son’s window on the side of our house and the curtains caught on fire.”

Ramirez said the fire started in Lyric’s bedroom at about 11:30 p.m.

“There was about a 10-minute difference between the fireworks making contact and the neighbor going in to put out the fire,” said Ramirez, an English teacher at Destrehan High School.

The neighbor put out most of the fire with a hose and then called 9-1-1, she said.

“Thank God none of us were home,” Ramirez said. “That could have been very bad because it was next to his bed where he would have been sleeping.”

Firefighters determined the entire house sustained heavy smoke damage and the contents in Lyric’s room were a complete loss, she said.

Luling and Paradis volunteer fire departments responded to the fire. 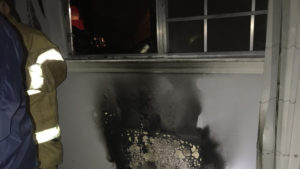 The family was visiting relatives in Kenner when they received the call that their house was on fire. They returned home in time to see firefighters at the scene and the damage to their house.

“We’re going to have a complete gut and renovate his bedroom,” Ashley said. “We certainly feel blessed. We know within a week or so we’ll be able to sleep there and go about our normal stuff.”

The Ramirez family are staying with her parents in Waggaman until their residence of 3-1/2 years is cleaned and repaired.

The explosive came from the driveway of a neighboring residence, only an estimated 20 feet away, she said.

The incident has made Ramirez an even stronger advocate for fireworks safety.

“It’s important to be responsible with fireworks and keep in mind the safety of others around you,” she said. “Adult supervision should always be provided when fireworks are being handled regardless of age.”

Ramirez said her neighbors are “completely upset” about what happened and they helped put out the fire that could have destroyed their home. But she added fireworks should be fired in a proper location.

“It could have been much more tragic,” she said. “The most tragic is he [Lyric] lost all of his Christmas presents from Santa.”

The family had just returned from Gatlinburg on a Christmas holiday and she had started removing Christmas decorations when calamity struck their home.

For Lyric, the loss raised questions.

When he saw what remained of his bedroom, he wanted to know what happened to all his toys and if they went back to the North Pole, Ramirez said.

“We told him his toys were going to the elves to fix them and give them to people who needed them.” He also was told about getting a new bedroom.

By New Year’s Day, she said they went shopping to replace his “big toy” – a Roarin’ Tyler, The Playful Tiger. A family friend they met at the store also bought Lyric a new toy.

Soon after Ramirez explained what happened to their home on her Facebook page, family members and friends, as well as fellow teachers and others all reached out to help.

“We’re certainly blessed,” she said. “We know that it’s all going to work out.”

At 6:30 a.m. on March 30, Stacey Trosclair woke up smelling smoke, but wrote that off as likely sugar cane burning nearby. […]

Corporal Adam “Bud” Coley recently earned a high honor within his profession as he was presented the Award for Valor, after the officer risked his life to save another.  […]