Many would likely deem the past two-plus years as unpleasant – COVID-19, followed by Hurricane Ida, has altered lives.

When combined, those two factors escalate to something beyond that.

“It’s been a nightmare,” said Tammy Nichols of Luling.

Nichols lost her home during the hurricane, a tree falling upon it to land the final blow. Like others who evacuated for the storm – she left to stay at her mother’s home, out of harm’s way – a night of anxiety was followed up by a gut-wrenching visual provided by a neighbor. In this case, it was a video of what remained of Nichols’ home.

“I was kind of speechless,” Nichols said. “Just that thought of, wow … we’re going to be homeless. It was a shock to my system.”

Nichols recounted that feeling early last week as she was just getting over another issue at hand – COVID-19, which both she and her 21-year-old son, Cole, contracted recently.

The scary part of that, beyond the surface of the illness by itself, was that Cole was particularly vulnerable to it, in theory. He is in need of a kidney transplant, which would be his second after receiving one 17 years ago as a small child. He is on a kidney transplant list, though he’s considered “inactive” on it until he clears a total of 28 days of being COVID-free.

The possibility of Cole coming down with the illness was one of Nichols’ chief concerns following the news about her home – being displaced and moving from site to site, standing in lines and the other realities of the immediate aftermath of Ida was not ideal for isolating.

“I kept telling FEMA, you’ve got to put us in something, because he’s going to catch COVID,” Nichols said. “And sure enough … we’re just getting over it now.”

While Cole is now doing much better, there was a worrisome time. He had to be hospitalized for a week and suffered from a bout of pneumonia. At one point he needed to be on oxygen.

“It was scary. I know he was scared. He didn’t want to go on a vent,” Nichols said. 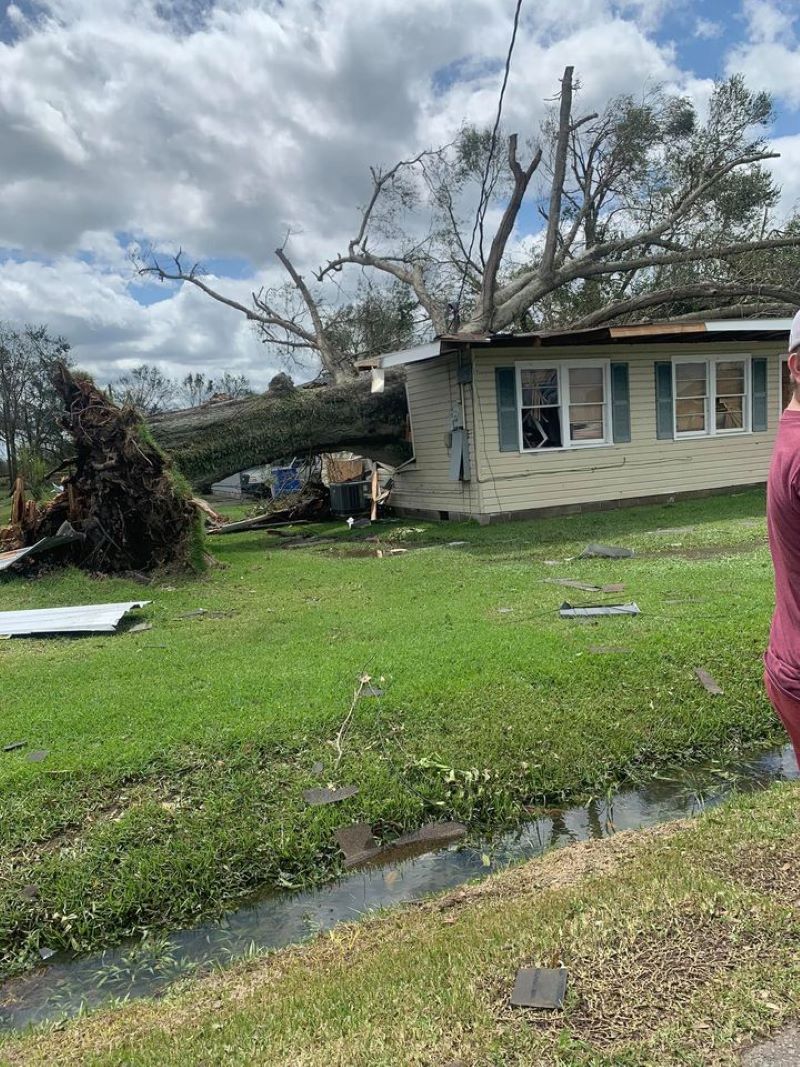 For a mother, juggling her own worries about her son’s health with the necessities of moving forward to settle the family’s living situation have been trying.

“The stress has been very overwhelming,” Nichols said. “It’s been hard. Through this I had my mom, I had my son … thank God for my mom, my brother and my kids. They’ve kept me pretty sane in spite of it all.

“At the same time, though, this has been, by far, the worst year of my entire life.”

She said she still has a few lingering issues from her own COVID bout, including a touch of a cough and some vision impairment.

“But for the most part, we both did OK, thankfully,” said Nichols.

After clearing that hurdle, the focus was placed back on rebuilding. She’s moving into a trailer supplied by FEMA and has been taking care of a few things in regards to her former home – specifically, the big step of having it torn down. It’s part of the new day-to-day reality for those who have lost everything.

“The good thing, at least, is that we left. We almost didn’t,” said Nichols. “If we’d have stayed, we wouldn’t be here … it’s been a really rough time, but it’s getting a bit easier now.”

Suspects are innocent until proved guilty in a court of law. Arrests • Toriel Flot, 26, of 339 Alexander Street in Boutte, was arrested May 1 and charged with aggravated battery (two counts). • Malik […]

Corporal Adam “Bud” Coley recently earned a high honor within his profession as he was presented the Award for Valor, after the officer risked his life to save another.  […]