Charles Looney fondly recalls a recent trip to Mobile, Alabama with fellow members of First Baptist Church in Luling, and the good they were able to do for a local worship camp there.

“We all came together to help bring this camp back on its feet,” Looney said. “Clearing out the downed trees, cleaning up the pond and clearing the roadways, so they can start bringing the kids back and help them grow and learn about Christ.”

Looney’s faith guides him in his day-to-day life, the chief reason the Hahnville graduate plans to attend Mississippi College to major in worship leadership.

That area of study allows him to combine two of his passions. Looney has been a member of the HHS marching band, for which he plays bass drum. His major-to-be at Mississippi College entails a music program that teach students how to lead worship in a church. In part through playing drums and/or guitar and singing.

Ultimately, he would like to go straight into ministry after college, possibly as a youth pastor.

“Actually, I started thinking about doing that at the beginning of my senior year,” Looney said. “It started coming to me in pieces. I feel strong in my faith … I think it’s a calling.”

He said his time with the band at Hahnville will be among his fondest memories, be it playing on Friday nights for Hahnville football games – particularly the road trips with his band mates – as well as going to different festivals.

Another group he enjoyed taking part in was the ROTC, especially the drill competitions. In his senior year, he reached the status of group commander. He was also a three-year member of Beta Club and four-year member of the Fellowship of Christian Athletes. Also athletically, he was a member of the Tigers’ cross country and track and field teams.

But most of all, the bonds he formed with his friends and classmates were what will be most lasting, he said. The past few years have been anything but normal for the Class of 2022. But while minutes spent together inside classroom walls were limited at times due to COVID-19 and Hurricane Ida, leaning on one another to battle through that adversity brought students together, Looney said.

He added another difficult time for the members of his class, the death of Hahnville student Ashton Flair in 2020.

“We lost one of our best friends,” Looney said. “That was really difficult for us, and we all became closer through dealing with that.”

Looney is a member of the Civil Air Patrol, a group auxiliary to the Air Force, after joining five years ago. A deputy first lieutenant and cadet commander with the group, he says one of its responsibilities is to effectively join the ranks of first responders in certain emergency situations.

“To go out and look for people if there’s a capsized boat or a downed aircraft,” Looney said. “(It’s an organization) I like being a part of, it gives you the chance to lead and to teach others how to lead. And to be a first responder, that’s something I like, knowing I can benefit someone and help people when they’re in need.” 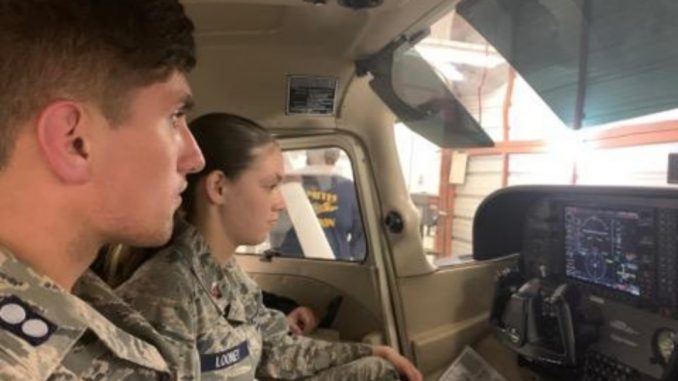