Approximately 0.5 percent of all Americans have completed a marathon. Devin Samaha is one of them.

The Luling man and former Marine began training in February to participate in the annual Marine Corps Marathon in Washington D.C. It was to be his first ever marathon entry, but due to COVID-19, the event was not held in D.C. this year and was held virtually.

That was still good enough for Samaha, who had worked far too hard to scale this mountain of a task – a marathon is a run of 26.2 miles, typically completed in approximately four to five hours. On Monday, Samaha took to the levee to make his run, beginning near the West Bank Bridge Park and running toward Avondale until the end of the track, then turning around to run back to the start.

“It felt pretty good to be over,” quipped Samaha. 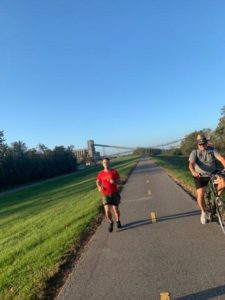 He also felt pretty proud, of course. Samaha served in the Marines from 2008 to 2013, and while he had never participated – or wanted to – in a marathon prior to this year, he looked into the Marine Corps event and his interest was piqued.

“This one seemed really fun, and (the Marines) are close to my heart,” Samaha said. “I wanted to give it a shot. It couldn’t be in D.C. after all, but I’d trained all year and worked so hard at it, so I decided to run on the levee. I was never going to skip it.”

Samaha took the task pretty seriously, and for good reason. Building up the endurance and conditioning the body for a more than 26 mile run takes full commitment, and for months upon months at that. He didn’t go into it blind, however: he trained with Run Free training, a company co-owned by Ryan Hall, who also acts as a lead coach. Hall isn’t just any coach – he’s a former U.S. Olympian who holds the U.S. record for time in the half-marathon, becoming the first U.S. runner to break the one-hour barrier (59:43).

“It was awesome. The best decision I ever made was to get a coach,” Samaha said. “I’ve always struggled with nutrition, so I wanted to get someone who really knew what they’re doing, and also someone who could teach me how I should run it. I learned how to eat, how to diet properly, and how far you can push yourself in a week … really, everything you need to build up to an event like this.”

And what he learned was he could push himself pretty hard while being careful to not overdo it. He’d get up at 4 a.m. each morning to go run for approximately two hours. In all, he estimates he was running about 60 miles per week. There was a setback over the summer when Samaha suffered an injury in July that limited him to bicycle riding to maintain his endurance level for about two months. He started running again in full in September and began training very hard to make up for the time he missed. 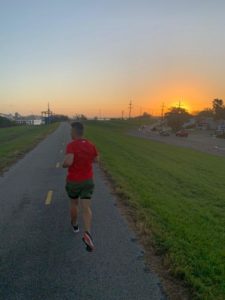 “I was fairly prepared,” Samaha said. “At 14 miles, about the halfway point, I started to feel a little bit of lactic acid buildup. I started pushing a little bit more, just to get a better time. After 18 miles, I can’t feel my legs. My quads aren’t firing as fast as they were, my knees are a little looser.”

Finally, those last three miles were in his grasp.

“At that point, it was really serious. That’s the real deal,” he said. “I knew that’s what will separate me from the pack.”

He pushed through and made it in a time of four hours and three minutes.

Samaha said what he’s proudest of was being able to recommit himself after falling out of the shape he was once in while enlisted. After going into the military after high school, he was a very fast runner, running sub six minute miles for three miles and running 5K races in less than 18 minutes. But he’d go on to college, get married and start a family, and his exercise regiment was deprioritized.

This was his first marathon, and he has no plans to make it his last. He said he has an eye on beginning training again in February of next year to get ready for the next Marine Corps Marathon, this time perhaps held live once again in the nation’s Capitol.

Heritage Weekend set for this weekend, open to public for first time

Through music, dance, demonstrations, exhibits and hands-on activities, Destrehan Plantation invites the public to take a look at Louisiana’s past during Heritage Weekend. […]

Destrehan resident Kim Costandi was athletic and involved in sports year-round when she was growing up, but adult responsibilities and motherhood meant she had a hard time incorporating exercise into her weekly routine. […]