It was welcome news for a dog that had survived being neglected and likely beaten, injured by a vehicle, was nearly euthanized and endured thousands of dollars of surgeries and therapy. Now, she had a well deserved new life with a dream home full of animal lovers and a new name –Annie.

“She was the sweetest thing,” Fricke said as one of her caretakers. “She never seemed like she was in pain. She was always ready to give kisses and couldn’t care less that she was hurting. Then I fell in love with her and bugged my husband to get her. We have a house full of animals.”

They met at South Paws Veterinary Surgical Specialists, where Annie was getting surgery and therapy, and where Fricke works as a night ICU technician. She provided the dog’s aftercare.

“She just melted my heart,” she said. “She was such a sweet baby.”

Fricke said they didn’t initially seek her adoption because she thought someone else would take her, but that changed when she saw the Herald-Guide story about her. She convinced her husband they were the best family for Annie and then she brought her three children, as well as their “escape artist ferret,” Sophia, to meet Faith at South Paws.

Then, at home, it was an equally warm greeting with their English cocker spaniel, Katie, Bella the pug and Spike the guinea pig, as well as Tom and Olaf the indoor cats.

Annie was an instant fit in the family.

Fricke said their middle son has bonded with her closely, giving up his top bunk to sleep on the floor in a sleeping bag or on the couch to be closer to her. He doesn’t want her to be alone.

This was all good news for Shelter Supervisor Jena Troxler, who recounted the dog’s injuries as being so extensive and costly that they had sadly decided she would have to be euthanized. But it didn’t happen because of a move she called “divine intervention” that came when Annie did the one thing needed to save her life – she stood on one of her hind legs.

This is how the dog got the name Faith at the shelter.

She was found seriously injured on the side of the road at the corner of Smith Street and River Road on Jan. 3 by Corinne Martin, who described her as being “so sweet.” It became such a theme in Annie’s life, warming so many hearts that everyone wanted to help. Even Martin donated $400 toward her care, as well as the St. Charles Humane Society donating $2,200, South Paws contributing surgery, therapy and overall care for her, and donations helped cover additional costs.

Ironically, it would be one of South Paws’ own technicians who fell in love with the dog.

“She just melted my heart. She was such a sweet baby.” – Laura Fricke

Troxler said Fricke, as a vet tech, is the perfect adopter for Annie, and would continue her physical therapy.

“She had three weeks of physical therapy and she drastically improved, but she needed continued care to rebuild muscle strength as her bones healed,” Troxler said. “She found that in a technician that works at South Paws Veterinary Surgical Specialists, that did all of her orthopedic procedures.

“Faith [Annie] went through a lot and it was our community support that made her procedures possible, but it was preventable.”

Troxler added keeping pets in a fenced-in area or confines of a leash prevents injury. But it was Annie’s determination to live that got her to a new home.

“She had the will and attitude to get better and beyond this injury,” Troxler said. “Even when she needed to walk slowly and with support after her surgeries, she always tried to go faster.  She is happy in her new home and soaking up the ability to move about freely and she cherishes her humans.”

“I had to make her a part of our gigantic animal family.” 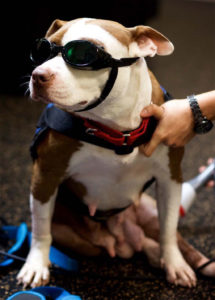 Nadine Madere, 82, a native of Antwerp, Belgium and resident of Luling passed away on Saturday, August 1, 2020. Visitation will be held at Our Lady of the Rosary Church in Hahnville on Thursday, August […]

Wonderful. A firecracker. Assertive. A prankster.

Audrey Maria Higgins’ loved ones paint a colorful picture of a woman who loved to help people as much as she loved to have fun. Audrey tragically passed away on July 7 after a holiday weekend boating accident. Six others were wounded as a result of the Bayou Des Allemands boat collision that took place at approximately 9:29 p.m. on July 4. […]

Seth Brunett’s life changed drastically on May 23, 2016 – and if the fundraiser his mother started last week is successful – his life will again change drastically. […]