Many holding signs as they walked down Judge Edward Dufresne Parkway Thursday, a crowd of students from Luling, Norco and R.K. Smith elementary schools were united in their message: bullying is unacceptable.

Those students and the teachers and faculty guiding them came together for the first “Bully Walk” held in St. Charles Parish, which came to life as part of a team effort led by Hahnville student Michael Scott and the Sheriff’s Office’s Juvenile Justice Division. The goal was to stand united against an act that can have far-reaching, adverse effects both physically and mentally.

The students arrived by bus and walked down the street led by a police escort. At the end of the walk, they arrived at the West Bank Bridge Park to enjoy music and snack time, while several spoke to the children about the dangers of bullying and importance of letting the right people know if they’re victimized or witness someone else victimized by it.

“Growing up, I’ve seen others be the victim of bullying. I have myself, as well,” said Scott, who planned the walk for his senior project. “I felt like this was a chance for everyone to come together, realize we’re all in this together and that everyone belongs.”

Scott reached out to Roanne Sampson with the Juvenile Justice Division to help guide him on an effective way to address bullying with the project.

“He came to us and when he said he wanted to take a stand against bullying with his project, my mind started darting around to ways we could do that,” said Sampson. “A march, a walk, something to encourage people to stay on the right path. It’s all about supporting him. He’s an incredible young man.”

Sampson said the event’s message was important because not everyone understands the total impact bullying can have on a person’s self-confidence and outlook. For some, the damage can be permanent.

Scott, Sampson and Parish President Larry Cochran were among those who spoke to the students at the park gathering.

“I think it’s great because, when we were growing up, children didn’t have all these outlets and means to bully,” Cochran said. “It’s always been a problem, but now you have social media and things like that. You have fighting in schools that I suspect often begins with bullying. You have things escalating where someone goes, gets guns and handles it in the worst fashion.

“Something like this, you can teach them how to resolve issues without resorting to physically fighting or verbally abusing someone.”

Capt. Pat Yoes stressed the escalating impact social media has in everyone’s lives, noting the added access and communication brings along with it different types of responsibility that the children of yesterday did not have to manage.

“Social media has changed the world. Education and discussion is so, so important as a result,” Yoes said. “When you have a safe learning environment, kids learn. And what we had today, something that brings awareness, that’s always a very good thing.” 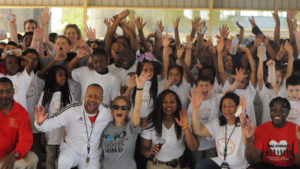 Return home has been an unforgiving, unfulfilled journey for many thus far

Shelby Kliebert remembers her hesitance to leave her Norco home in the days leading up to Hurricane Ida – just 10 days earlier she and her husband welcomed their newborn daughter into the world to join the couple and their 1-year-old son. […]