“We loved it,” Curry said of winning. “It’s good that we finally knew we won. At the last hour or so, when the boats are still coming in, you worry they’ll beat you.”

But they didn’t beat this twosome.

Frogging on Friday (June 7) night for the next day’s weigh-in became an adventure for Curry and Matherne in St. John the Baptist Parish.

“We had a big alligator garfish, close to five feet, jump into the boat,” Curry said. “It thrashed around on the bottom.”

Matherne added, “We brought it home, too … just like the frogs.”

“We were just going down the canal and shining with the light – and there he was behind the tree,” he said.

The two, who are experienced froggers, knew where to find prime their big catches. The Fisherman Wharf tournament allows hunting them anywhere as long as it’s a public waterway.

“I love to frog and fish,” Curry said.

But he doesn’t like eating frogs so whoever is with him on the hunt gets the catch and that’s usually Matherne and his brother.

Curry’s frogging tip is when grabbing frogs beware it’s not a small alligator because from the side the two tend to look alike in the water. In the light, an alligator’s eyes reflect red.

For Matherne, he agreed to go frogging on his brother’s urging and it turned out to be something he really enjoyed.

“It’s was kind of exciting,” he said of winning the tournament. “I’ll be here next year. I just hope it will be more kid friendly.”

His seven-year-old son, Tayton, wanted to join the group and he did. This was their first time weighing frogs, which they don’t typically do on their frog hunts, and it was fun seeing they’d caught the winning 6.6 pounds of frogs.

At the weigh-in at the wharf, there was suspense.

“I didn’t know actually who won because I know those guys have air boats and can go to areas where no one has ever hit before so it was kind of iffy,” Matherne said. “But we know there’s bigger frogs out there.” 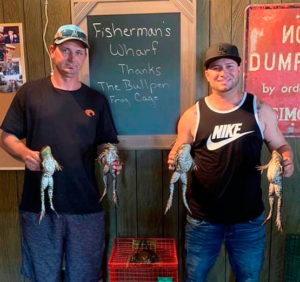 Melba Lucille Dunham Rome April 23, 1934 – May 23, 2020 When you lose a parent you lose the strongest bond with your past. However, you carry on with precious memories, pictures and family. Such […]

Joseph Weber entered peacefully into his eternal rest on June 29, 2020 at his home in Killona, Louisiana surrounded by his loving family. He was born February 1, 1943 to the late Samson and Josephine […]

Cameron Cunningham knew he was in the mix to potentially be Hahnville High’s salutatorian for the Class of 2020, but when the call came it still left him rather shocked. […]