Throughout the storm that was 2020, there were some shining examples of strong community. The Adopt a Senior cause was one such instance – and as it turns out, it wasn’t a one-and-done practice.

This year, there are groups featuring seniors of both Hahnville and Destrehan high schools who are nominated for “adoption,” with those adopting the student sending gifts and words of encouragement. Some adopt one senior, others adopt several.

The practice became a nationwide trend last year after the COVID-19 pandemic led to the premature end of the school year, leading to the cancellation or major alterations of senior events at many schools, like proms and graduation ceremonies. At this time a year ago, when Adopt a Senior began to grow as an idea, even school districts that would go on to have graduation ceremonies – as in St. Charles Parish – could only make tentative plans at best.

Adopt a Senior presented a way to show seniors who had lost so much of their senior year, and activities they had looked forward to for so long, that people were thinking of them. A River Parishes page was set up by Destiney Guillon, a St. Charles Parish teacher, and more than 1,000 seniors were adopted as part of the activity.

This year, there are specific pages set up for each high school in St. Charles Parish. Vicki Mehrtens, who began and administrates the Destrehan High page, is no stranger to this: she began an Adopt a Senior page for Ponchatoula High School last year, and this year she began one for Destrehan, as her granddaughter is a senior there.

She said while last year’s end for seniors was jarring, the Class of 2021 isn’t exactly getting the full senior experience either, and she thought the page could make for a positive gesture for the group.

“In some ways, they’ve lost more than the seniors last year, though they all lost so much,” Mehrtens said. “Last year’s class lost the last three months, and this year’s group lost so many activities and could be in school with their friends only two or three times a week. (The schools) did what they could to accommodate them, but of course it isn’t the same, and it isn’t the whole senior experience. They missed a lot and this is a little bit of something that we can do.”

Mehrtens’ granddaughter sings with the school’s choir, an activity she’s been involved with since the third grade and one that was effectively sidelined this year.

“It’s a big part of her life,” Mehrtens said. “They haven’t been able to sing all year … there’s no official prom. Some parents are putting one on, but it will be different. This is supposed to be a year you look back on forever.”

Mehrtens is pleased at the support the project has garnered, with nominated seniors quickly finding an adopter, but she hopes to see more parents post their seniors for nomination. She estimated 80 seniors have been listed to the page while the full class roster is close to 300 strong.

Sean McAllister adopted a senior last year and when he saw Mehrtens’ follow up page for this year, he found the previous experience so rewarding he knew he wanted to help once again. He did, and upped his adoption count to 3 DHS senior students. 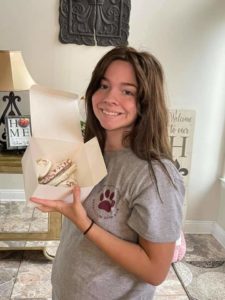 “There wasn’t even any hesitation on my part,” he said. “I got so much enjoyment and fulfillment the last time, and felt it was such a great idea. It was the height of the pandemic and such a positive thing … so I was grateful for that chance last year, and when I saw it again this year, I decided to really get involved.”

For the exercise, parents create a post about their senior student on the page and let people know about their likes, hobbies and interests. Those adopting the student will reach out to the parent and work out specifics.  Part of the fun is seeing some of the creative gifts and gestures posted onto the pages. A popular route last year was to send things that would get the senior “dorm ready” were they college bound, like snacks or supplies. Some gifts were monetary.

“Sometimes it’s a bunch of goodies and snacks, some people send gift cards, T-shirts … there’s a variety of ways you can go,” McAllister said.

Hahnville parent Brianna Trauth said she didn’t think twice when she saw the cause revived in 2021.

“As soon as I saw it … my son is a senior. I went in and added his information,” Trauth said. “I had adopted a couple of seniors last year. I decided to adopt a senior myself (again). Our poor little seniors didn’t have a full junior or senior year. They’ve had no dances in over a year. So I think it’s great they can get a little extra recognition from a stranger … to let them know there are people out there who are thinking of them.”

It certainly has given many students a special moment in their senior year.

“I thought it was a cool idea,” said Destrehan High parent Stephanie Smith. “I found out from a friend. Right now is really hard for everyone and especially students that graduated last year and this year. They haven’t been able to experience the normal senior festivities, while some are also going through other issues. My daughter doesn’t have Facebook so she didn’t know. She was very excited when they came over … it put a big smile on her face. Her two older sisters were a little jealous. They said ‘dang, why couldn’t we be adopted when we graduated. We want to be adopted now!’ This would definitely be something nice to carry on in the future.”

Of course, the greatest reward comes when each student posts to the page after receiving their gifts.

“When you start seeing those pictures of them and what they received online, it’s pretty special,” Mehrtens said.

In a building seating 70,000 strong, Ella Grace Francis commanded the attention of all. […]

Pro Football Hall of Famer and Destrehan High alum Ed Reed will be manning the sideline in a new role next football season – as the head coach of a college program. […]