The St. Charles Parish Planning Commission will consider an estimated $10 million development planned for Destrehan at its Aug. 1 meeting.

Businessman Todd Trosclair announced plans to pursue the project in April and is seeking approval for construction on a 75.6-acre tract of land.

The project calls for a 58-lot subdivision on 13100 River Road in Destrehan, which would be called Saints Place. Also planned is a 17-lot light industrial park on 20 acres west of 405 Alpha Drive in Destrehan, extending towards I-310 along the south side of the railroad tracks.

Trosclair’s 310 Development LLC is named as the applicant for the subdivision. The company and P&L Investments in Destrehan are named as applicants for Plantation Business Park Phase II.

The plat shows access being provided by new streets, which will have access to River Road by connecting to existing Campus Drive West. Except for Parcels A and B, each proposed lot would have the required frontage along the new roadway.

The location is the former Pan American Southern Refinery site.

In April, Trosclair outlined his plans for the development.

He said he planned a business park and residential units on 100 acres. Trosclair said  he hoped to break ground on the project by the end of this year.

Although he had prospects for the business park, he declined to name them at that time. He said the subdivision would provide “upscale living.” 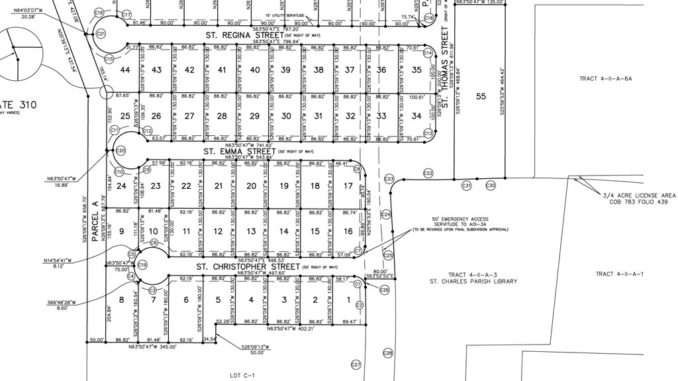 Hahnville is building on its success from a season ago.

The Lady Tigers won 21 games last season and a share of the District 7-5A championship, and with a strong core group of returning players, 2019 was filled with promise. The team is making good on that, posting a 10-3 record over its first 13 games of the season. […]

Carl J. Simoneaux, Sr., 59, a native and resident of Bayou Gauche, LA, passed away on Saturday, December 21, 2019. He loved spending time with his family and loving on his grandkids. He loved hunting […]