The first St. Joseph’s altar on the Island of Sicily was humble in the 1700s, but the dedication has grown with four area churches celebrating the patron saint of the poor with altars of their own.

St. Charles Borromeo, St. Gertrude, Holy Family and St. Anthony of Padua Catholic churches are among those hosting an altar this year. They are open to the public.

At St. Charles Borromeo Catholic Church, the St. Joseph Altar Society has baked 18,555 cookies, including biscotti, fig and seed cookies, for the altar, which will be held at the church’s Borromeo Room, 13396 River Road in Destrehan.

The Altar Society is hosting its fourth annual altar and meal.

Owens said they will also bring a statue of St. Joseph to homebound church parishioners on March 19 who can not attend the mass.
For more information, call (985) 764-6383.

Holy Rosary Church in Hahnville is holding an altar this year, a celebration it holds every other year, said parishioner Quincee Berthelot.
This year’s altar will be held on March 19 from 10 a.m. to 6 p.m.

A special Blessing of the Altar will be held at 10 a.m. followed by a “meatless” lunch at noon. Donations will be accepted.

At St. Anthony of Padua Catholic Church in Luling, the altar will be blessed on March 17 followed by a viewing of the altar, said parishioner Kerry Hotard.
“We do this altar for the people to bring the people together to a place where they can offer their petitions to St. Joseph for intercession to God for their needs,” Hotard said. “At the closing of the altar, the food is distributed to the poor.”

Donations will be accepted with proceeds going to those less fortunate, the youth traveling to Medjugorja on July 30 and next year’s altar, Hotard said.
The altar will feature cookies, breads and fruit, as well as cakes, wine and baked fish.

The altar is done by the St. Joseph’s Altar Society members and friends, said Society member Sherry Folse.
“All are invited to participate in this beautiful tradition,” Folse said.
For more information, call (985) 758-7542.

The history of St. Joseph altars

Several Catholic churches in the parish will celebrate St. Joseph’s Day (March 19) with St. Joseph Altars.  Although the first altars in Sicily were given in thanksgiving for favors received, many of today’s altars are erected to pay homage to St. Joseph as patron saint of families and as fundraisers  to help the poor. Originally, beginning as an Italian tradition, today it is not defined by just one nationality. St. Joseph is known as the patron saint of families, naturally in time of family need, people prayed to him as an intercessor to the Lord to answer their petitions.

Legend has it that the first altar erected was in thanksgiving in the Middle Ages when  Italian farmers were experiencing crop failure.  After praying to St. Joseph, a successful crop of fava beans planted as fodder for the cattle saved the people from starvation.  Another story tells of a group of exiled Italians set adrift in a small boat. In despair, they prayed to St. Joseph for their lives to be saved.  In thanksgiving, they would honor him the rest of their lives.

Still another story is that Jesus, Mary and Joseph were journeying through the countryside when they were met by a farmer.  The farmer, recognizing them, invited the holy family into his home. The family’s meager supply of food was set out for the visitors.  Thereafter, the families prayed to St. Joseph when seeking favors and protection for their families.

Today, as in years past in South Louisiana, those contributing to St. Joseph Altars often do so as thanksgiving for petitions answered. Often, petitions are made for safety or healing of loved ones. 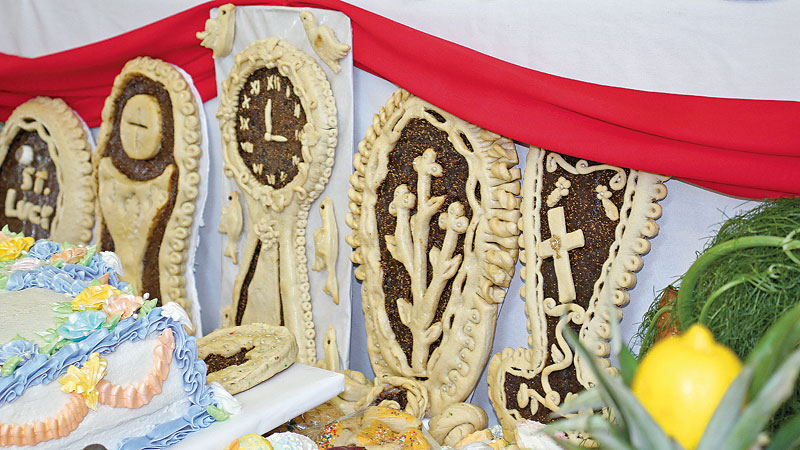 Tradition reigns when building and decorating an altar.  Only the best of everything for St. Joseph. There should be food of every kind.  Two of each vegetable and fruit. Special breads, and pastries are designed based on Christian symbols. Flowers are to flank the statue or pictures of St. Joseph placed as the centerpiece of the altar.  Fresh and dried pasta, wine, almond candies, biscotti of every flavor you can think of, traditional dishes such as pasta with red St. Joseph gravy (no meat), frittatas made with local fresh vegetables, decorative and edible breads, and cakes, fava beans, statues of saints and candles are used to decorate the altar.

It takes days to build and decorate the altar.  Volunteers gather to bake and cook for the altar. On St. Joseph’s Day, a free lunch is served to all visitors. There is no charge, but donations are accepted to help the area’s needy people.  No one should feel obligated to donate.

All are welcomed to partake of this special meal. Each person attending receives a bag of goodies to take home.

Hahnville celebrated as the clock struck zero in its 69-56 victory over visiting Destrehan Tuesday night, enjoying a victory well-earned over its archrival – and a storm weathered.   […]

Quartet delivers familiar sound in a different package, in Luling for concert

“Where Bach meets Bon Jovi” may seem like an odd fit, but for violist Ian Zanca and his fellow Dallas String Quartet musicians – and the millions who have enjoyed their performances – it strikes just the right note. […]