As of June 17, Trishan Charles has lost 76 pounds.

The start of her weight-loss journey began with coping with stress.

“Between November 2018 and New Year’s 2019, I lost about 30 to 35 pounds due to stress,” Charles said. “I completely stopped eating and was just living on coffee and water.  When I would feel too weak I would eat a little something and than go back to just coffee and water. I was not purposely trying not to eat I just didn’t have any type of appetite to eat anything.”

The Destrehan resident was dealing with the cost of having two sons in college at the same time, but she welcomed being able to turn it into a positive experience.

In January, after she returned to her job as a bus driver for St. Charles Parish Schools, friends’ encouraging words started her thinking.

“I was talking to a friend and they were talking to me about pressing through and keeping a smile on my face, but at the time I was only smiling on the outside and crying miserable on the inside,” she said. “I soon realized that they were right. I could not change the things that I was personally stressing over and, at that moment, I decided to change my negative weight lost into a positive one.”

By Jan. 3, she started going to the Anytime Fitness gym in Destrehan at least three to four times a week and started the 100 Workout Challenge and completely changed her eating habits. She began a meal plan, replaced sodas with water – six to eight bottles of it a day.

Charles is on Day 67 of her workout.

Her husband, Waylon Sr., along with their sons are her biggest supporters.

“I could not change the things that I was personally stressing over and, at that moment, I decided to change my negative weight lost into a positive one.” — Trishan Charles

“They give me plenty of support when I am weak or feeling down,” she said. “Isaiah, my youngest son, has given me a workout regimen to do each day:  StairMaster 10 minutes a day, then Treadmill 45 minutes a day and then the Bicycle 10  minutes a day. I do try to keep up with his plan. In the beginning, I couldn’t do 15 seconds on the StairMaster. I am doing much better today, I can stay on it for a least 12 minutes now … baby steps.”

Having started exercising only in January, Charles has lost 76 pounds and gained a new lifestyle.

“People can tell you to feel better, go buy new clothes, go get your hair done, you look okay … all that, but if you don’t feel good about yourself in the inside none of that matters,” she said. “I realize now I have been letting my outward appearance show how I was feeling or made twwo feel on the inside. I’m so blessed today to honestly say I’m finally happy with myself on the inside, and now I’m letting that show on the outside regardless of stress or what I maybe going though now.”

Charles is thankful, that although that her life change started in a negative way, it turned in a positive weight loss.

Since January, she lost 40 pounds the healthy way. Charles’ goal is lose another 40 pounds to bring her weight to 135 pounds.

“If I can help anyone, I’ve learned the stress is a silent killer,” Charles said. “You have to find someone to talk to or find a way to release it or it would take over your life.” 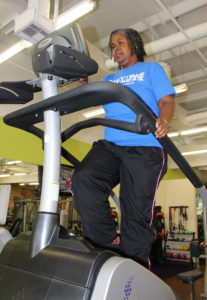 A man was arrested and booked in St. Charles and Jefferson Parishes on multiple counts of fraud connected to an alleged major scam that involved using the stolen identities of children to create false identities that were then sold and used to purchase high dollar items. […]

Suspects are innocent until proved guilty in a court of law. Arrests Zachary Granier, 30, of 101 Churchhill Downs in Montz, was arrested June 29 and charged with aggravated battery with a dangerous weapon. Brandy […]

Gyms adhering to safety protocols as they reopen

As Gov. John Bel Edwards partially reopens the state in phases, he has made provisions for fitness centers to open at a reduced capacity. And while gyms around the parish are bustling, two fitness center owners said it has become apparent that physical fitness is not their members’ only motivation to break a sweat. […]