Chris Getsla was in high school when he decided to start a tribute band, but it would turn out to become an idea they’re continuing today and with a multimedia spin.

“That was something I had in common with the Baby Boomers,” Getsla said. “Although I’m not a boomer, I’ve been a Beatles fan my whole life. When there was an opportunity to start a tribute band to perform Beatles music that’s what I wanted to do, and it’s a privilege to be able to do that across the country.”

So which one is Getsla, right?

He’s Paul McCartney, and been so since he helped start the tribute band at age 17 at Glenbrook South High School in the Chicago area in 2000. The band, called BritBeat, started touring nationally in 2008 and is coming Aug. 17 to the Dr. Rodney R. Lafon Performing Arts Center in Luling.

This will be the first time in the band’s history it is coming this far south.

“We’re very excited to be bringing the show down there,” Getsla said. “It’s a privilege to be doing this and meeting other Beatles fans around the country.” 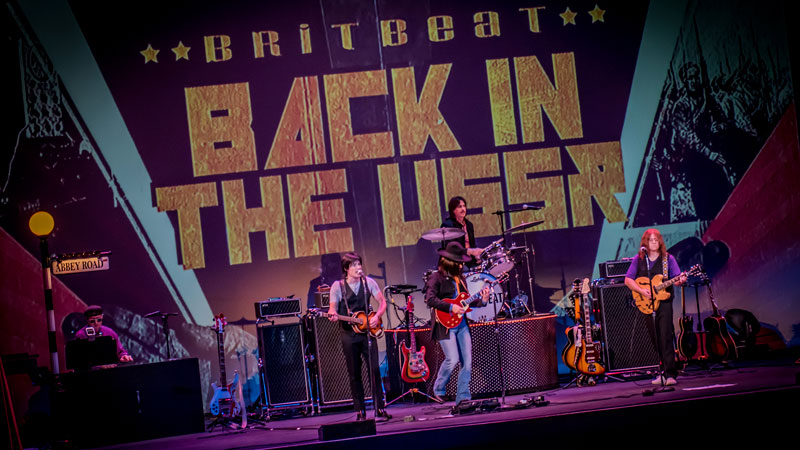 Getsla will perform along with Eli Echevarria as John Lennon; Jeff Isoe as George Harrison and Greg Austin as Ringo Starr. Matt Kooi is the band’s keyboardist.

“The show has evolved quite a bit,” said Getsla, who is also the show’s producer. “It started out as a high school band and has evolved into a nationally touring Beatles tribute show.”

“It has a stunning video production feature behind on a screen,” he said. “It’s been professionally, Hollywood produced. The images people see on the screen intertwined with the show really help the band tell the story of the Beatles.”

While the tribute band performs, the Beatles history is flashing behind them offering a fully immersive experience that takes the viewer back to the 1960s when the Beatles were the rage. Scenes appear from the clubs in Liverpool to Sgt. Pepper Lonely Hearts Club songs to the Abbey Road recordings, and the band does six costume changes to embellish the experience.

“One of the great parts about Beatles fans is that it’s cross generational,” Getsla said. “There are Baby Boomers still going to these performances and still fans of ‘Beatlemania,’ but we also see young audiences with them as well. We see kids, teens and older people … everyone loves the Beatles, and it’s handed down to younger generations. It’s relevant music today and will stay so for years to come.”

Getsla said they do their best to bring the Beatles experience to their audiences who can’t see the Fab4 as a band anymore.

“The images people see on the screen intertwined with the show really help the band tell the story of the Beatles.” — Chris Getsla (aka Paul McCartney)

Portraying the Beatles, as well as playing their music, is a big responsibility with getting the music right and particularly with the songs so ingrained in people’s memories, Getsla said. They know what the Beatles sound like and it triggers memories with audiences, and that means performing them just like the record.

“I’m asked a lot of times what is it about the Beatles that makes it so special and unique, and I always think that’s a huge question,” he said. “Their story truly has a beginning, middle and end. It’s a wonderful story … rock and roll, psychedelic and studio music. The show offers the full art of this music, costumes and multimedia video. We put together a theatrical Broadway style show.”