At last count, Amanda Thomas has lost 72 pounds, a feat she marvels over as one that helped get her out of a wheelchair.

Thomas lost weight and is a wellness success story.

“I actually was involved in a car accident three years ago and became wheelchair bound with two broken legs, two broken ankles, 18 broken ribs, and a broken sternum (breastbone),” she said. “I was wheelchair bound for about 18 months and gained about 82 pounds.”

She faced losing her left leg from the knee down and up to four surgeries on her right leg, which was shattered from her knee down. 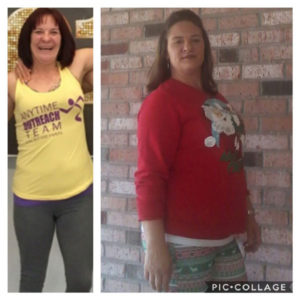 “It got pretty dark,” she said. “I was actually seeing two therapists, but I have two children and they were my motivation. My mom is disabled. Between them and my mom, I knew if I didn’t get better, who was going to care for them? I found a much stronger relationship with God and he helped me in finding a better spot for myself, my mom and my children.”

Also, after seeing the movie, “Walk. Ride. Rodeo,” she had an epiphany from a comment in it: “[Your] wheelchair can either be your wings or your anchor.”

Fortunately, her recovery progressed quicker than her doctors expected so she started physical therapy.

“At that point, I could start walking again,” Thomas said. “Eight months later (from date of her accident) I was doing therapy four times a week at University Medical Center in New Orleans.”

Although fighting considerable pain and arthritis, she decided it was time to change her life. She started eating right, boosted her physical therapy riding the bike every day for 20 minutes and then a friend told her about the Anytime Fitness in Destrehan with spin classes. She joined the gym in November of 2017.

“I just decided to work out more and maintain my eating with the help of Anytime, I learned better nutrition,” Thomas said.

She joined the gym’s group free classes and then dedicated the money she would have spent on food to group training classes, also at the gym. She got a personal trainer, Kristine DeJean, who worked with her directly and came to understand her disability.

DeJean helped her core strengthening to help posture and balance, and Thomas started logging her meals that helped with accountability. She also helped find a program that worked well with her cardio and strength training.

“I basically just stuck with it for about a year, going to group classes, group training classes and striving to meet small goals,” she said.

By November of last year, Thomas got rid of her wheelchair. She still worked within physical limits, but felt it was the only way to lose what she had come to consider “a comforting pacifier.”

The road ahead had become clearer for a woman who couldn’t stand and was eventually able to do full throttle in spin class, which further led to her intensifying her cardio.

About this time, she said she and fellow gym members started FitFest, a competitive group workout where the trainers paired six to 20 people they train to compete against each other for “bragging rights” that lasted until March 23. She said it motivated them to do a six-day-a-week workout: Monday and Wednesdays with group classes; Tuesday and Thursday with group training classes, Friday with a trifecta group class, and Saturday’s workout.

DeJean said she knew Adams belonged on her team. 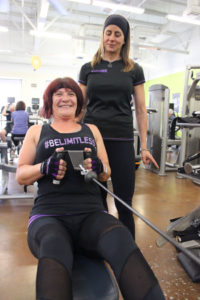 “She is self motivated, determined and didn’t let her injuries define what she could do.” DeJean said. “And I wanted her attitude towards healthy living on my team.”

They earned points from workouts, nutrition and weekly nutritional and hydration classes, which brought her to another milestone.

In the last year, she’s maintained her weight and enjoyed life.

“I’m much more mobile and athletic,” Thomas said. “I might not be able to be an athlete, but I can be athletic.”

Thomas said her life is great.

Despite still dealing with pain several times a day, she said her recovery from her injuries is off the chart.

“I understand my health condition,” she said. “I can participate in sports with my kids. I have my limit, but my limit I never thought would be this far. I thought I’d be a cripple my whole life.”

She considers herself a work in progress. Thomas isn’t sure about losing more weight, but knows she’s stronger and has more stamina.

“It was the best and worst thing that happened to me in the same sentence,” she said of the accident. “It wasn’t the way I expected to go, but I wouldn’t change it for the world.”

It’s her testimony, which she shares with others in hopes they, too, will understand there is hope, Thomas said.