How to navigate hard decisions, the important of honoring commitments and why you shouldn’t give up when something gets hard – these are the life lessons Zephan Cohen said he will take away from his time at Destrehan High School.

The 2020 graduate spent his time as a senior just as he did his previous high school years – in the band.

“Band really took up a good a 95 percent of my time throughout high school,” he said laughing.

“The first time I was introduced to music was at Norco Elementary,” he said. “It was in fourth or fifth grade and they have us those little recorders.”

Even as a child, Zephan felt instantly drawn to the art of playing music.

While in 6th grade at Harry Hurst, Zephan’s musical education continued. There he began to learn the mechanics of band instruments.

“Before we actually got to pick up the instrument, we learned a little bit about all of them,” he said. 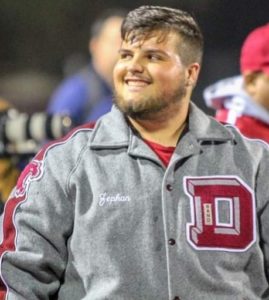 “My older cousin played tuba, and I thought ‘well that looks way too heavy to carry around’, so I’m going to pick something smaller,” he said. “I picked the next largest thing – the baritone.”

“Drum major is the highest student position you can get in the band,” Zephan said. “At the beginning of every school year we have an audition to see where everyone places … I was excited because I felt like it would be something new and I had an open mind if I didn’t make it.”

Zephan said it was thrilling to walk up to the spreadsheet posted on the band room door, where he learned where he would place in the band that year.

DHS Band Director Sharie Mahler said Zephan didn’t just do it, but rather he excelled at it.

“Zephan has molded into a fine leader as a section leader, drum major and model citizen,” Mahler said. “In all of these positions, Zephan gained respect from so many of his peers by teaching and leading with a firm, yet approachable disposition.”

While he may continue his interest in music by trying out for one of the various bands at Nicholls University, Zephan has decided to major in Nursing.

“I’m excited about being on my own,” he said. “I feel like I’ve been in the nest for so long and I’m ready to fly.”

Mahler has no doubts Zephan will succeed in his next chapter.

“He is a young man of integrity, grit, and perseverance, and these traits will serve him as he continues to serve others,” Mahler said.

It wasn’t all that uncommon an occurrence for someone to mistake Isabella Distefano for her identical twin sister Sophia, or Sophia for Isabella. But for those who know the twins, it’s always an easy call. […]

Officials with Bayer Crop Science, a division which acquired Monsanto Co., confirmed this morning that the major nearly $1 billion expansion at its Luling chemical plant has been cancelled. […]

About Monique Roth 111 Articles
Roth has both her undergraduate and graduate degree in journalism, which she has utilized in the past as an instructor at Southeastern Louisiana University and a reporter at various newspapers and online publications. She grew up in LaPlace, where she currently resides with her husband and three daughters.
Website