Ed Reed beamed with pride as he spoke in his hometown of St. Rose, the park he’s dreamed of bringing back to his community finally a reality.

“This is a celebration,” the Pro Football Hall of Famer and Destrehan High alum said. “And it’s a blessing for St. Charles Parish.”

Reed was in town last week commemorating the grand opening of Parquet Park, a playground for the community’s youth aimed at providing children access to safe facilities, positive programs and mentors, while serving as a symbol of hope and healthy choices. The park has been in the works for years and has been a collaborative effort between the Ed Reed Foundation, fundraising efforts, St. Charles Parish and other organizations. St. Charles Parish President Matt Jewell, Councilwoman Marilyn Bellock and representatives of Reed’s Eye of the Hurricane Foundation were among those in attendance for the ribbon cutting, along with Reed. 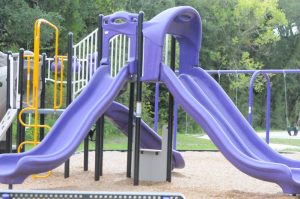 The former Baltimore Ravens star safety has believed a park in the community has been sorely missed since the demolition of the neighborhood park he grew up spending so much time in, as it offered an alternative to getting tangled up in crime, drugs or other dangerous activities. The playground is near the streets of Turtle Creek and Preston Hollow where Reed spent his childhood, at 190 Short Street.

“The opportunities that I’ve had, I want to give (to children) from the neighborhood,” Reed said. “I have a cousin I lost to gunfire around here. Mothers and fathers who lost their kids to gun violence around here since the park I grew up in (was eliminated) … it’s a dream that came true, and it was with the help of a lot of people sitting right here in this community.

“I know it will change lives. A park changed my life, took me away from drugs, from gun violence and so many other things.”

As Reed spoke, a group of children were already shooting baskets behind him on one of the newly constructed basketball courts.

“As soon as we put the field out, I was getting calls saying, ‘They’re already back there,’” Reed said with a laugh. “I’m like, the field’s not even marked! And once those basketball goals were up, I knew it was over.”

One man sitting and listening to Reed was Benjamin Parquet, a mentor since childhood to the former and also to many other young people in the community. It is Parquet who the park has been named for – a fact not known to Parquet until Reed announced it during his speech.

“I’m not sure if you know, it’s Parquet Park,” Reed said to Parquet with a broad smile, before the two shared a warm embrace. 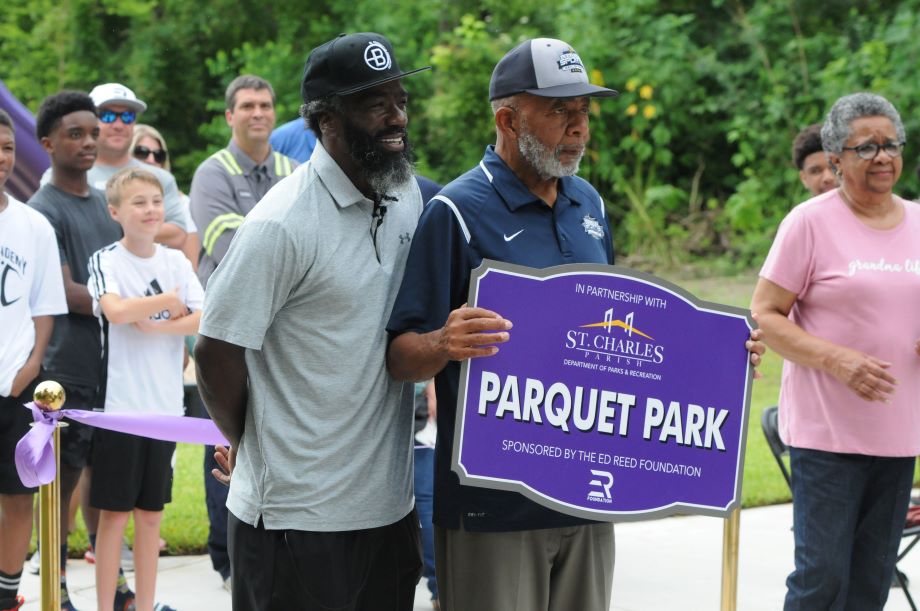 “Mr. Parquet has changed lives as long as I can remember,” Reed said. “I just wanted him to have this. Health wise, he’s hurting right now. And he came to my camp earlier. He’s still back here. I told him to go home … get off your feet. But things like this, like my camp, it gives me life. It gives him life, helping kids and helping people, and seeing the smiles on kids’ faces.

“We’re here to serve. All of us. Every last one of us, to serve and speak life into each other … Mr. Parquet, as long as I have known him, he’s been serving people. So who am I not to do the same? Because he’s the reason why I was able to achieve my goals.” 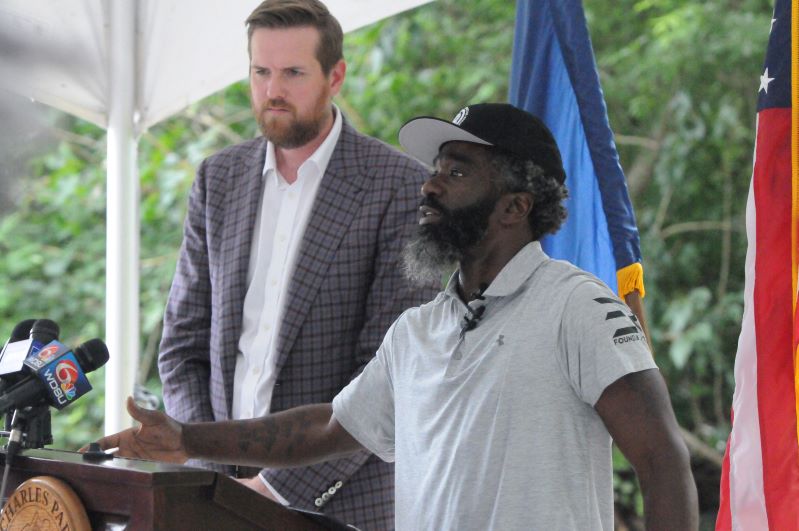 The state-of-the-art park features a 100X300 multi-use turf field, two basketball courts, a playground for children and walking path among its amenities, as well as an access road and 16 parking spots for convenience. There is also an open area for picnics, cookouts and other activities.

A plate lunch benefit for the Appleby family will be held on June 25 from noon to 3 p.m. at the Paradis Fire Station, located at 807 Barber Road in Paradis. […]