Rebecca D’Antonio, Olivia Gunter, Ashlyn Kirby, Maddie Rau and Caitlin Smith joined her among LSU selections.  A student-athlete earns scholastic All-America honors with a 3.5 or higher overall grade point average on the WCGA’s adjusted grade scale. The 2019-20 squad combined to earn a 3.319 GPA for the year. LSU gymnasts have combined to earn 160 honors since 1991.

Ryan, a 5’2 sophomore, was a decorated student-athlete at Hahnville, where she won 10 individual state championships after becoming the first member of the school’s then-newly established gymnastics program as a freshman. 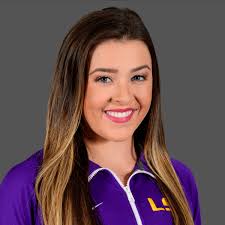 After initially committing to the University of Alabama, she shifted course in favor of LSU during the summer of 2019.

She said it wasn’t a decision that came easy, but ultimately the chance to stay close to home while continuing her competitive career was one she couldn’t say no to. When the opportunity presented itself to still join the team in Baton Rouge, she made the call to change.

“It was definitely a later call than I expected,” Ryan said at the time. “Staying close to home was a big factor at play. Alabama has a phenomenal team, program, facility, coaching staff, education … it wasn’t a slight toward them at all. Both are top notch schools. You never expect to be in that position, but I was. It was a tough decision, but this is what I felt like was right for me. And I’m really excited about it.”

She was St. Charles Parish’s Student of the Year in 2019.

D’Antonio, a junior from New Orleans, is a computer science major with a 4.152 cumulative GPA. Gunter, a senior from Mandeville, Louisiana, owns a 3.996 GPA in mass communication.