Leading 6-4 in Game Two of the World Series, Tampa Bay watched as an unwelcome sight strolled to the plate – superstar Los Angeles Dodgers slugger Cody Bellinger, who represented the game-tying run with a man on second and two outs in the bottom of the eighth inning.

Aaron Loup got the call to face him.

The Hahnville High alumnus and veteran left-handed reliever struck Bellinger out to end the threat, and he recorded the first two outs in the bottom of the ninth inning to help slam the door on a victory that tied the series up 1-1.

His father, Chris Loup, watched it unfold with the same butterflies in his stomach he had watching Aaron pitch in Little League, at Hahnville and at Tulane. The only difference? This time, the entire world was watching.

“It’s unreal,” Chris said. “He had an awesome outing … the emotions are just through the roof.”

He spent several days in Arlington, Texas to watch his son pitch – the World Series was held in at a neutral site at the Texas Rangers’ Globe Life Field to guard against COVID-19 infection and interruption. Watching his son pitch in pursuit of a world championship was an experience beyond his wildest dreams, he said, and even though the Rays ultimately lost in six games, he says he has plenty of pride in seeing his son at this level.

“I think he’s having the most fun he’s had since he’s been called up to the majors,” Chris said.

Aaron is the veteran of the Tampa Bay bullpen, the 31-year-old its most experienced reliever and second most experienced pitcher, behind only starting pitcher Charlie Morton. He’s also become one of Tampa Bay manager Kevin Cash’s most trusted arms in the late innings – twice, he was called upon to put out bases loaded fires against the Houston Astros in the American League Championship Series, escaping those instances with just one run allowed.

“To see how much they trust him means the world,” said Chris. “It’s awesome to watch and his confidence is through the roof right now.”

That Aaron is part of a bullpen that’s helped spur the Rays to the World Series is a feat that comes after one of the most trying times of his career. Last season, he pitched in just four games for the San Diego Padres, as result of an injury that began giving him trouble a season prior.

“I don’t think he lasted a month before he irritated his elbow again,” said Chris. “They put him on injured reserve and later tried to bring him back, but it didn’t work out.”

Aaron visited with doctors to find the best course of action, and a new procedure allowed surgeons to clean out accumulated scar tissue that had settled in his elbow flexor. He was able to rest all year as it turned out – San Diego did not make the 2019 playoffs and thus did not have to rush the lefty back.

His contract with the Padres expired, and ultimately he would decide to sign with Tampa Bay, though his spot was not guaranteed – he signed a minor league deal with the team to prove himself healed from his injury. Such deals aren’t common for veterans with solid reputations like Aaron has established, but there was also a second variable compounding his situation: the advent of the newly established three-batter rule, put into place for the 2020 season that forces a pitcher to face three batters before they can be removed from the game.

That was a particular threat for Aaron, who had entrenched himself as a specialist, tough as nails against left-handed batters.

“I’d see him warm up three times in a game and never get in, or pitch to one batter, one pitch, and be out of there,” Chris said. “We thought maybe it would hurt him.” 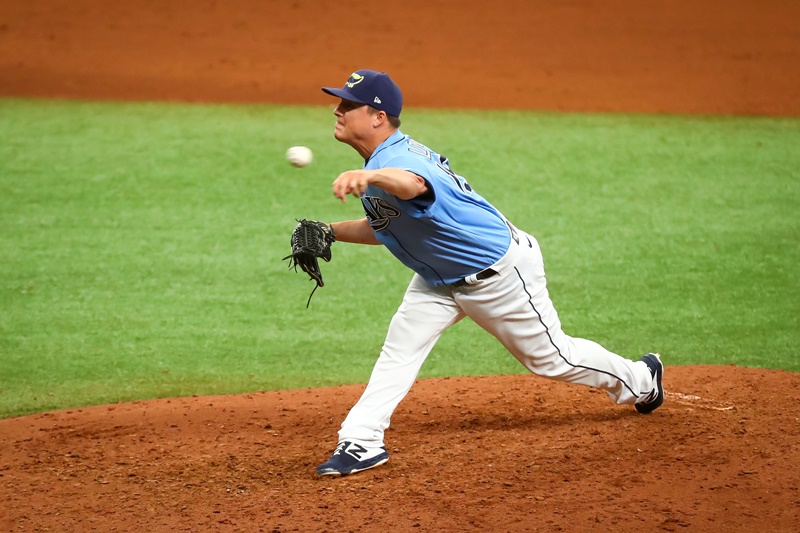 But the Rays saw enough of Aaron to secure him on the Major League club. Instead of hurting him, the rule actually gave him the opportunity to show what he could do in longer outings, and specifically against right-handed batters. The results were strong: he posted a 2.52 ERA and 0.84 WHIP over 25 innings and 24 games in the shortened season, the former mark representing his second lowest ERA in his nine major league seasons, and his WHIP a career best.

“When he was in Toronto, he’d go two or three innings, so we knew he could pitch,” Chris said. “Now, he’s getting a chance for extended time and showing what he can do. He’s picked up about two miles per hour on his fastball … he’s healthy and strong.”

A Raceland native, Aaron became Hahnville High’s first-ever major league player upon his call-up to the Toronto Blue Jays in 2012. He was a four-year starter for the Tigers under coaches Mark Sims and Frank Cazeaux. With Aaron heading the rotation, Hahnville went to the 5A state playoffs in all four of his seasons with the team, over which he tallied a win-loss record of 32-7. In 2004, he went unbeaten, going 10-0 with a 1.02 ERA in his junior season, and was the lone underclassman on the 5A All-State team. Among his prep highlights was a complete game no-hitter at Terrebonne during his sophomore season.

He went on to Tulane, where unlike Hahnville, he did not find instant stardom – or stardom at all. He posted a 5.12 ERA over 82.2 innings as a freshman and sophomore. As a junior, however, he began to find his footing and led the Green Wave in strikeouts. While his road wasn’t a smooth one with Tulane, pro scouts saw more than enough to be intrigued.

“He was  pretty much the big man on campus at Hahnville, but at Tulane … I think the game was a little too much for him at that point,” Chris said. “He struggled, and at Tulane he was never that standout, the star of their team. But he had what scouts were looking for. They saw the talent.”

Toronto drafted him in the ninth round of the 2009 MLB Draft and quickly began to tap into the talent that attracted the scouts. Twice he was named to midseason All-Star teams , and in July of 2012, when reliever Luis Perez of Toronto was sidelined by injury, Loup got the call to replace him in the majors. He appeared in 33 games that season and notched a 2.64 ERA, the first of three straight seasons with an ERA of 3.15 or less.

He spent nearly seven seasons in Toronto before he was traded to Philadelphia, which was making a push to the playoffs that ultimately fell short in 2018. Then San Diego.

“Never in my wildest dreams,” said Chris. “Watching him perform on this stage, it’s wild. This is the World Series, the best of the best, and we’re so proud of him.”