For his entire life, the NFL was the plan for Kirk Merritt. Arkansas State was not.

Merritt signed with the University of Oregon as a 4-star recruit during his senior year at Destrehan High School and earned national attention by earning the championship win at The Opening athletic competition in 2014. The NFL seemed inevitable. But Merritt would spend time at Texas A&M, East Mississippi Community College and, ultimately, Arkansas State before his college career was through.

“It was a humbling experience … I went to a JUCO after those big schools, in Power 5 conferences in front of full packed stadiums,” Merritt said.  I went from having everything to not having everything.”

Through it all, though, Merritt could be close to having it all once again and achieving his dream. Thursday night marks the beginning of the NFL Draft the first of a three day event that will see more than 250 collegiate athletes selected, each to join one of the league’s 32 teams.

He’s been preparing for the draft for weeks, though the pre-draft process isn’t a traditional one due to the COVID-19 pandemic. He hasn’t been able to make visits with teams, he held a virtual pro day in Dallas, putting it on video as he went through the NFL’s athletic testing drills and he’s spoken with NFL team representatives through online conferencing.

“We worked around it, and they watched (the pro day film),” Merritt said. “It was kind of tough, but people already knew I could run fast and jump high … the only thing that kind of hurt was not being able to do any visits because of the virus. But my medical history is good, there’s nothing to be concerned about because I’ve never had issues with my health, thankfully.”

While athletes had to find different avenues to make an impression on team personnel and scouts, NFL teams no doubt are enticed by Merritt’s collegiate production and athleticism.

Merritt caught 70 passes for 806 yards and 12 touchdowns during his senior year at Arkansas State, following a junior season that saw him rack up 83 receptions for 1,005 yards and seven touchdowns.

Those numbers show he can produce at a high level, but the draft pool is full of players who have posted strong statistical resumes.

Where very few of them have been able to compete with Merritt, however, is in terms of pure athleticism—his is elite and very rare, and it’s been that way for years.

In 2014, Merritt bested more than 100 of the nation’s most highly recruited athletes to win the SPARQ national championship at The Opening, an invite-only camp held at Nike headquarters in Oregon. There, Merritt recorded a 4.43 time in the 40-yard dash that helped separate him from a field that included future NFL players Minkah Fitzpatrick (a first round pick) and Josh Sweat. 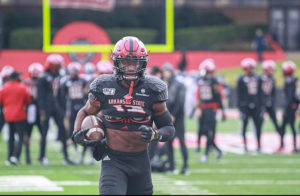 At his virtual Pro Day, Merritt showed he’s only become faster and stronger since then. He recorded a 4.33 time 40-yard dash, and times of 4.05 and 7.12 in the shuttle and 3-cone, respectively. Merritt posted 23 bench press reps and a 45.5 vertical jump.  The website NFL Draft Diamonds, which chronicles NFL prospects, to opine Merritt might be “the most freakish player” athletically that its writers had seen from this draft class. The numbers were verified to teams by former NFL scout Josh Cox. It also led to growing attention on Twitter, where fans took note of the numbers.

“Shane (Merritt’s agent) knew him, so thankfully that worked out in my favor,” Merritt said. “It feels awesome that people were taking notice. That’s been a great experience through this whole thing.”

But for all of his gifts, Merritt admits that were not for the support of his family and friends, he may have given up on his dream.

He made his collegiate debut at Oregon in 2015, playing games in a stadium not all that far from where his national spotlight had shined brightest at The Opening competition. He played in 12 games as a true freshman, Merritt announced he would be transferring to another school, and two weeks later he found a landing spot at Texas A&M. He would have to sit out a year, but that was not a large concern as he hadn’t redshirted while at Oregon.

But weeks before Merritt was set to make his Texas A&M debut in August of 2017, he was suspended and then dismissed from the Aggies team after an off-field incident that led to his arrest. He would plead no contest to two counts of a misdemeanor.

Suddenly, the bright lights of the SEC and PAC 12 conferences were a thing of the past for Merritt, and he went on to play in the relatively modest arena of junior college at East Mississippi.

“I’ve gone through a lot of adversity throughout my whole college career,” Merritt said. “Things happen in your life for a reason and that goes for both football and for life. Without the support of my family, friends, teammates and coaches, I wouldn’t have been able to make it through … I feel like if I can overcome that, I can overcome anything.”

It wasn’t long before he found on-field success again. In 2017, he led the Lions in receptions and helped East Mississippi win the National Junior College national championship for a second straight season.

“I created a bond with those guys for the rest of my life,” Merritt said.

Following that season, Merritt returned to the Division I ranks, joining Arkansas State for his junior year. He posted his first collegiate 1,000 yard season there, leading his team in receptions, yardage and touchdowns. In 2019, he followed that up by leading his team in all three categories and to a second winning season.

Merritt said Tuesday he had spoken to several NFL teams, including the New Orleans Saints, L.A. Chargers, Cincinatti Bengals, Miami Dolphins, New York Jets, Arizona Cardinals, Green Bay Packers, New York Giants and Washington Redskins. He added that he’s been hearing he projects as a potential mid-round pick, which would make late Friday or Saturday the most likely time to hear his name called. In the event he isn’t drafted, it seems certain he’d garner heavy attention in the undrafted free agent market—but he of course hopes to hear his name called this weekend.

“I wouldn’t say I’m nervous, but I am anxious,” Merritt said. “Anxious to see what team I could be part of, what coaches and teammates I could have … it’s been a really busy time, but it’s exciting.”

Colon cancer now the third leading cause of cancer-related death

According to Dr. Ryan Griffin, a hematologist and oncologist at St. Charles Parish Hospital, there will be an estimated 2,400 new cases of colon cancer diagnosed in Louisiana in 2020. […]

by Majoria's Supermarket - 2 days ago