Ethyn Powe recalls the accident that left him with a severe skull fracture and burns from being dragged on Hollywood Park Drive in Montz, but doesn’t remember University Hospital or the helicopter ride to Children’s Hospital.

Powe’s grandmother, Wanda Watts, recalls in vivid detail what happened to him on March 25.

“It was a total shock to all of us when he got hit,” Watts said. “It was just being there with him and seeing him through all of this, and getting a seven-year-old to understand the seriousness of the trauma.”

Powe was riding his bicycle on the sidewalk along the road around 6 p.m. that day when a man on a dirt bike suddenly struck him head on and then dragged him and his bicycle several feet onto the roadway, she said.

An hour after the incident, the St. Charles Parish Sheriff’s Office arrested and charged Randy Bellow, 25, of 206 Hollywood Park Drive with vehicular negligent injury, ATV prohibited on shoulder and obstruction of justice.

The obstruction of justice charge resulted from Bellow apparently removing his dirt bike and debris from the crash scene before deputies arrived to investigate, according to the Sheriff’s Office.

Bellow is accused of attempting to pass Powe on the roadway and colliding with him.

The man apparently carried the child to a nearby house and placed him on a sofa in a carport, according to Watts. Someone at the address called 911 then a bystander recognized the boy and called his family.

“The deputy wouldn’t let us down the road where his bicycle was where he was hit,” she said.

But, after walking around the area in search of Powe, they found him on the sofa with EMTs working on him.

“At that point, I didn’t know they had called a helicopter in,” Watts recalled. “The child was bleeding from the right ear and had a lot of cuts on him. He would open his eyes, but he wasn’t fully conscious.”

The helicopter landed by the Bonnet Carre’ Spillway, flew Powe to University Hospital and that’s when they learned about his two skull fractures. The doctors wanted to put a plate in his head, but backed off the move when they realized how close the fracture was to his carotid artery. 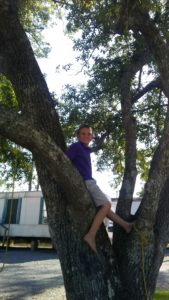 Powe still deals with health issues from the collision, including a blood clot in the right ear that’s also affected his hearing and is being tested. They’re awaiting the results of a CAT scan, hoping it’s healing and not closing in on the artery, and he’s limited on physical activity.

“No riding the bicycle, no football or trampoline … and it’s been difficult telling a seven-year-old he can’t do these things,” Watts said.

In fact, he may never be allowed to do them again because of his injuries.

He’s made remarkable progress in healing, but his grandmother said they’re trying not to be over protective.

“It’s like he wants to put it behind him and keep going,” she said. “But he doesn’t understand the seriousness of the injury. You can’t put him in a glass bubble and protect him, but he can never sustain another head injury.”

In the days leading up to the landfall of Hurricane Ida, St. Charles Parish Sheriff Greg Champagne had an extremely important decision to make. […]

Joshua Lewis had no idea that spending his senior year of high school in another state would propel him into starting a nonprofit, but he said he wouldn’t change a thing about the journey he is now on. […]