Randy Caire’s return from Medjugorje left him yearning to repeat the rich and graceful experience he’d had there so he decided to establish a chapel of perpetual adoration in St. Charles Parish.

As it turned out, Caire wasn’t the only one determined to make it happen. Lilla Lottinger was trying to establish one, too, so they united forces. They both approached Father Donald Cote, the priest at St. Mark’s Catholic Church in Ama at the time, and he agreed they had found a place for the altar.

“It is re-experiencing the grace which was the impetus at the beginning,” Caire said. “It was the way God got me to do everything I could to establish that chapel. I was obsessed with it. I wanted to repeat what I found in Medjugorje and thought this was the way it could be done. I think Lilla and I were on the same wavelength.”

There would be more moments that Caire felt God had called him again.

In the first five years of the altar’s founding, he recalled some frustration over people cancelling their hour of praying that required he fill in to maintain the chapel as one of perpetual adoration. But, on one of those times, he recounted entering the little building with the altar to find a young girl there he had not met before.

“She just started to cry her little eyes out for 10 to 15 minutes and then left the chapel,” he said. “That’s how the dear Lord let me know it’s important to keep the chapel going.”

They remained set on continuing to provide a place for people to pray “and let the Lord help them with whatever prayers they need,” he said.

One of them was the late Meghan Schexnayder Greco, a Hahnville native, who suffered seven years with a rare type of bone cancer.

“She had an experience with the chapel and how the dear Lord helped at that moment,” he said. “So many people have told me, ‘Oh, Randy, I went over there and the grace of God was at work.’”

Caire heads the committee that has kept the altar manned with about 150 committed members and 50 substitutes. With the exception of about a month after Hurricane Katrina, extreme weather conditions and the Easter Triduum, these devotees have knelt at the altar and prayed.

Even after a similar altar was established at St. Charles Borromeo Catholic Church in Destrehan, many of these members continued to pray at the Ama altar.

Rosary Crain, parish secretary and altar member, has prayed at the chapel every week for the past 10 years. Crain said the challenge is to keep finding volunteers when someone dies.

Ernestine Capel, one of the oldest members of the committee, recalled the chapel’s humble beginnings.

When Father Cote said they didn’t have a place to put the altar, she said Lilla Lottinger replied, “All we need is a room,” so he volunteered a 10-foot-by-20-foot portable building that had been donated by the parish school system that was being used to house newspapers. It was renovated, moved on cross ties to its location and opened on Feb. 8, 1989.

“It’s the best place to be for one hour a week,” Capel said. “Jesus and the Eucharist is there. There’s about a third of the original people still going to the chapel. The chapel is a source of peace. You’re meeting with Jesus on this earth.” 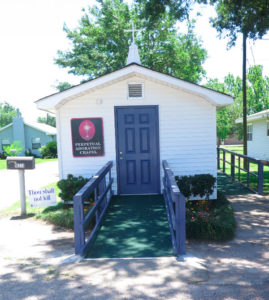 While music has always been a part of Philip Babineaux’s life, he says watching his daughters share in that passion with him is unexpected and extremely special. […]

Jolane Beatrice Dawson Higginbotham was born August 25, 1943 and passed away May 2, 2020 at 76 years old. She is survived by her children, Michael Burton, Paula Burton Hymel, Jason Burton, Heather Loupe (Justin), […]