When 11 Florida vocalists joined forces in 2015 to form the a cappella group Voctave, they may not have known exactly where the journey would take them.

To more than 100 million video views, as it turns out – and to Luling on Jan. 28, as Voctave hits the stage at the Lafon Performing Arts Center.

The group has performed all over the world and is responsible for several songs and albums that have reached No. 1 on iTunes, Amazon and Spotify, and Voctave has ranked on Billboard Magazine Top 25 charts. Voctave is best known for its performances of Broadway and Disney hits – the latter a callback to the individual performers’ respective roots as Walt Disney Entertainment alums.

The group has rarely toured thus far, so this show represents a unique chance to see Voctave live.

“What’s really cool is these are Disney caliber performers, and it’s well known the kind of strict guidelines (Disney) has,” said Chris Melohn, Lafon Center Director. “They’re on a 10 or 11 city tour, and we’re one of their stops. People are posting about it online saying they wish (Voctave) was coming to their city and that they wish they could find a way to get to Louisiana for the show. It should be a super special experience.” 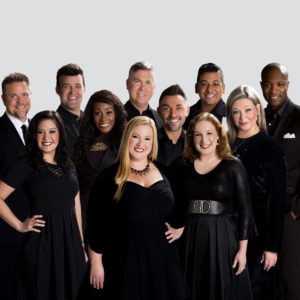 Each of the Voctave performers have been part of Voices of Liberty, the very popular a cappella group that traditionally sings at Disney’s Epcot Center in Orlando.  The singers began posting videos online of their performances, and one hit the mark: their “Disney Fly Medley” went viral and sparked a huge growth to their fanbase.

Ultimately, that put the crew on their current course. In 2016, Voctave released a self-titled debut album. Later that year, they released another: The Spirit of the Season. The next year, Voctave hit its third big release, The Corner of Broadway and Main Street, which doubles as the name of Tuesday’s showcase at Lafon. Voctave has released five albums in total.

A cappella is a performance without a background instrumental or accompaniment. It’s voice in its purest form.

Group founder Jamey Ray, in an interview with Bleep Magazine, said he believes the group has found much of its popularity because a cappella has a genuineness to it some other forms of music can lack at times.

“I think it’s because it’s not like the other noise,” Ray said. “People like the fact that they look at a group of normal looking people in a studio and they’re hearing what we sound like in that room.”

Ray went on to say that’s something that lands with the audience as well.

“There are good pop singers out there and many of them are good live,” he said. “But it will never sound exactly like the album because it’s all so produced. Most of them can’t come close to what the people in Voctave can do. When people come to our concerts, they usually tell us we sound the same, if not better than, the recording. It’s such a good energy performing before an audience instead of just being in the studio and it’s nice to have people react that way.”

Melohn said from what he’s seen of the group through video, it’s like watching 11 beautiful performances at once.

“Their voices are so clear, almost like crystal,” said Melohn. “It’s mind boggling they make the sounds they make … how much they can sound like a keyboard, or the rhythm section. It’s just pretty amazing. They’re all just incredible singers.”

Tickets can be purchased at lafonartscenter.org or at the Lafon Center on-site box office.

Friends Judy Ebeling, Joy Robert and Wilma Matherne love to sew, and they love to sew together. So when they can sew together and benefit a great cause – they said there’s nothing better. […]

When it rains, it floods

Fifty two days ago rain poured and homes flooded all around St. Charles Parish in a deluge that caught many residents by surprise. Today many residents experienced weather deja vu as rain fell and streets and yards became rivers once again. […]

For not a tragic accident that cost him his life at the age of 16, Don Raymond would be fresh off celebrating his 68th birthday. But though his life was cut short, he left a lasting legacy as a phenom – and a pioneer – in prep athletics. […]