‘There’s a good chance you may not come home.”

When a St. Charles Parish Sheriff’s deputy responds to his or her first call, that person has undergone more than 1,700 hours of training.

“There are lectures, classes and more, but also practical focus on realism in training, said Capt. Mark Candies, the Sheriff’s Office director of training. “That’s the most important thing for these cadets is to realize what you’re doing in training. From the Academy all the way through your career to the last day of your retirement just may help save your life or a civilian.”

It made a difference for Cpl. Burt Hazeltine, who survived three gunshot wounds from a man who apparently ambushed him on U.S. Highway 90 while he directed school traffic in April of 2015.

Shortly after Hazeltine got out of the hospital, he thanked Candies and other instructors for what he learned in their classes because he believed in that training.

“In a high stress, critical incident you need to keep your wits about you,” Candies said. “In Burt’s radio traffic, he described the suspect, saying he’d been hit and was behind a car calmly providing the information needed that helped save him. We’re fortunate to have him. He is now one our training staff and tells the cadets about that incident and how it started as a normal day going to work.”

Candies called it a wake-up call.

“These things aren’t supposed to happen in St. Charles Parish, but it did,” he said.

It’s why the Academy has evolved to ensure deputy and community are both safe. 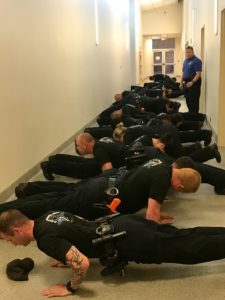 “From cadet to deputy, the most important thing we stress is it’s a profession that there’s a good chance you may not come home,” said Capt. Mark Candies, the Sheriff’s Office director of training. “They need to go into this profession with that approach.”

For the cadet, the Academy brings begins it with one question – “Do you really want to do this?”

Candies said no one has “just quit the Academy” yet in St. Charles Parish, but as classes proceed there may be reasons they can’t stay such as lacking the skills to do the job or the profession just isn’t a good fit so they choose to leave the program. Even so, the majority of the cadets typically graduate and have successful careers.

“We tell them we’re not going to give up on them,” he said. “We’ll keep pushing them to succeed and overcome any obstacles they’re experiencing in their training and perform as a basically trained cadet.”

A deputy’s key lesson is “de-escalation techniques,” which involves communication, body language, and active listening, Candies said. The goal is to avoid or diffuse a conflict and trying to do so without having to use force. If force must be used, the emphasis is on use of less lethal weapons, negotiation and recognizing persons with mental disorders to avoid provoking them.

“They process all this together to assess the situation and formulate a reasonable solution to resolve it,” he said. “Awareness is a key element of protecting the public and the officers themselves.” 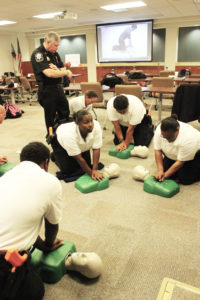 This what a cadet learns at the Academy.

By the time a deputy is hired in the enforcement division, he or she has completed nearly 15 weeks at the Academy. Overall, it could take two to three years to get from academy graduate to patrol depending on the applicant’s qualifications and uniform division’s needs for people.

Once on patrol, the deputy learns the community.

“Community policing is a big part of our operational culture. It’s understanding what activity is common in a neighborhood, which may not be elsewhere in St. Charles Parish,” Candies said. “Burglaries are common when school’s out and during holidays, and knowing this and applying lessons learned in the Academy and the deputy’s response to calls for service.”

Today’s deputy deals with more danger and must stay current with their training, he said. Law enforcement is a rapidly evolving career that also means staying abreast of training. Interpersonal communication skills are also critical in a deputy’s ability to be able to talk to people and relate to their situation.

In Candies’ 32 years with the Sheriff’s Office, the biggest change he’s observed in Academy training is the implementation of mandated active shooter training. As someone who also survived life or death situations, his proudest achievement is resolving them without shooting his gun. The parish’s seventh active shooter drill is scheduled in January with date and place to be announced.

“We were very fortunate that everyone came home,” he said. “I would say the No. 1 thing that made that happen has been a consistent effort for increased in-service training every year.”

“When stuff hits the fan, you will not rise to the occasion, you will sink to the level of your training,” he said. “We train all year long every year.”

Della R. Guilliot, a resident of Larose, native of Des Allemands passed away at the age of 62 on May 23, 2020. Visitation will be held at Larose Baptist Church on Thursday, May 28th from […]

Hahnville High School has chosen the successor to former head football coach Nick Saltaformaggio, as multiple sources confirm Tigers’ offensive coordinator Daniel Luquet will be the next man to lead the program. […]