Although St. Charles Parish Public Schools got a “B” in this year’s Louisiana Department of Education’s (LDOE) performance rating, school officials say the change is in the method of grading – not the system.

Until this year, the system ranked among the state’s 21 “A” systems. It’s a grade it maintained since 2013 when LDOE started grading systems. But this year, only five districts kept their “A” grade, with Zachary Community School District holding its No. 1 ranking.

Only one St. Charles Parish school – Norco Elementary – held its “A” grade this year. Three schools – Destrehan High, Hahnville High and J.B. Martin Middle – dropped from an “A” to a “B.”

LDOE says Louisiana is redefining what it means to be an “A” school.

“We are analyzing the information to determine ways to improve and are currently on the right track with several action steps that are already in place.” – Al Suffrin

“By 2025, an ‘A’ school in Louisiana is one where the average student has fully mastered content, is ready for the next level of study, and has access to the same opportunities as his or her peers across the country,” according to LDOE. “As the state works toward that goal, it is gradually raising the bar for what it takes to earn the highest grade.”

The changes are required under the U.S. Department of Education’s “Every Student Succeeds Act (ESSA) of 2015 (previous version called the No Child Left Behind Act) aimed at equaling opportunity for all students. 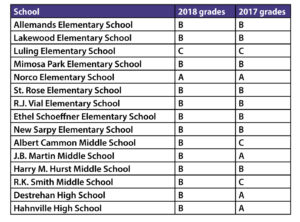 LDOE interventions will include additional resources and support for early childhood programs, as well as school redesign grants for struggling schools, additional funding for academic planning such as “Striving Readers Comprehensive Literacy” subgrants and direct student services to increase access to college and career coursework and opportunities.

According to Superintendent Felecia Gomez-Walker, for several years, the LDOE has modified these assessments, changed the accountability formula and adjusted the factors to design a rating system for schools and school systems. State Superintendent John White has stated it would cause “A” grades to drop by 38 percent.

Calling the LDOE report “confusing” and not articulating “a school’s or school system’s overall effectiveness,” Gomez-Walker said the system released its own 32-page report outlining its successes.

“The public is encouraged to review our 2018 Quality Profile that provides information on our commitment to high standards, equitable opportunities, support for struggling students, transparency and an accountability system with credibility,” she said. “Our Triple A School System achieves success in Academics, Athletics and the Arts.”

School Board President Al Suffrin said, under the old formula, the system would have retained its “A” with a score that would have risen from 100 to 107.3.

Suffrin, as did Alexander, pointed to the higher grading standards for the change.

“We are analyzing the information to determine ways to improve and are currently on the right track with several action steps that are already in place,” Suffrin said. 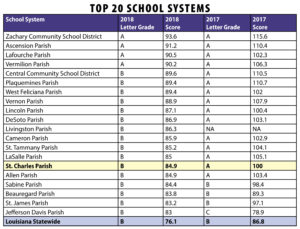 Alexander singled out an academic area that needs improving.

“Like anywhere, there’s always room for improvement and I have noticed an area where I feel we can improve and that’s our social studies score and, in particular, U.S. history,” he said.

Each school considers and analyzes the data and information provided by the state in addition to using additional measures to determine success and opportunities for improvement.  Gomez-Walker said St. Charles Parish Public Schools remains a top performing school system based on success indicators valued by families and the community.

Schools are graded on a 0  to 150 point scale and receive letter grades of “A” through “F.” Those grades factor in points earned by students for each subject tested during standardized tests.

Hahnville lost for the first time in District play Friday night against rival East St. John at home, 43-39, but bounced back Tuesday back in its gym with a 47-38 win over Thibodaux. […]