Development will be reconsidered at April 4 planning meeting

Prepared with numerous questions about the Heather Oaks residential development proposed for Luling, area residents packed a town hall meeting held Wednesday to discuss the project’s impact on their community.

Lafayette developer Cliff Guidry, accompanied by Danny and Julie Hebert who are working on the project, said he responded to their concerns with larger lots preserving property value, traditional drainage over retention ponds, and a two-street loop configuration rather than a single street layout with a cul-de-sac. 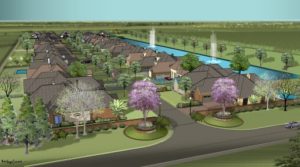 “We feel like all of the concerns have been addressed,” Guidry said. “We feel that the market is there so we’re going to push forward with the development.”

On Thursday (April 4) at 7 p.m., the Planning Commission will consider the preliminary plat with these changes.

Residents again questioned whether the now 169-lot project would hurt their property value, although some did say they appreciated larger lot sizes.

One resident fired back, “169 … that ain’t gonna happen.” But another resident said it will be “a slow build” with possibly half of the project done in 10 years.

Luling resident Tommy Faucheux said Guidry approached him about holding the meeting with residents in adjoining communities like Willowdale and Lakewood.

Danny Hebert explained this is the first step of the multistep process toward getting approval for the subdivision.

He further explained the project includes 4.3 acres set aside adjacent to Rathborne Park for recreation, as well as wetlands that would be protected in perpetuity.

Cochran expressed gratitude to Guidry for holding the meeting, but also encouraged residents to attend the Planning Commission meeting.

Area residents asked how trees and debris would be removed from the 52-acre site, as well as how much traffic is anticipated with debris removal. Residents also noted there are at least two eagle nests on the property, which Julie Hebert said would be addressed in the permitting process.

A topography survey would be done to preserve some trees on the property, he said. Guidry added they could limit truck removal to the weekends to avoid interrupting school traffic.

Several residents asked about the subdivision’s impact on local schools.

“We feel like all of the concerns have been addressed.” – Cliff Guidry

Julie Hebert said based on information from St. Charles Parish Public Schools, the development would add another five children per grade, which several residents called speculation.

Some questioned the street configuration including cross streets every 1,500 feet, which Danny Hebert said is a parish requirement. Guidry added it costs more, but it’s appropriate for connectivity with the Willowdale and Lakewood communities.

Albert said a waiver could be obtained for the cross streets, but it would have to be approved by the Parish Council.

“We have a lot of issues we’re looking at in Lakewood,” he said.

Fisher-Perrier added the public would have additional opportunity to comment on the project before the council.

Residents further questioned why they get so few details about the project at this point, but Guidry replied preliminary plat approval sets that in motion before considerable money is spent on a development that could be denied.

Guidry added, “I spent a lot of money to get rejected.”

Dr. Ken Oertling, Superintendent of St. Charles Parish Public Schools, announced cancellation of all parish public schools for Monday through Wednesday of this week in preparation of Tropical Storm Sally. […]

St. Charles Parish officials are asking local residents to secure items around their homes and continue to stay weather aware ahead of Hurricane Laura’s landfall in Louisiana later tonight. […]

by Gulf Engine & Equipment - 1 day ago

by St. Charles Herald-Guide - 5 days ago