The lives of Destrehan’s Yousef Skaikay, his wife Louissa and their three children took a jarring turn last month, when Louissa passed out and was rushed to the emergency room.

Louissa had had bouts of neck pain for almost a calendar year prior to the Nov. 12 incident. Physicians believed it to be muscle spasms, a pinched nerve and minor arthritis at different points over that span, but none of the treatments directed to improving those ailments seemed to land.

But two months before her emergency room visit, her symptoms became more intense, including nausea and vomiting. An MRI did not provide an answer, and she began physical therapy – she was two weeks into that when she passed out.

She underwent successful emergency surgery to treat the immediate issue, but days later, the news wasn’t positive. This time, an MRI was more revealing and directed doctors to a diagnosis of Diffuse Giloma (DPG). An aggressive tumor was at the root of her issues – Louissa learned she had brain cancer. 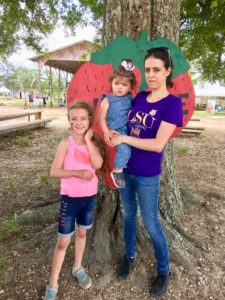 Louissa’s pain ran from the back of her neck to the bottom of her head. The tumor proved the cause of all of it: it was located at the start of her brain stem and was stopping proper drainage of fluid from the brain. Through the surgery last month, a shunt was placed in her brain that has allowed the fluid to pass down into the stomach. It’s stopped her symptoms completely, Yousef said, including the dizziness and nausea that accompanied the pain.

But the shunt was necessary due to a major complication of the matter: the tumor’s location rendered it effectively inoperable. It cannot be removed.

“Radiation would only prolong life as much as we can, it wouldn’t solve the issue,” Yousef said. “You can’t biopsy it. You can’t touch it. So it made it all the more concerning.”

He said the family has been scrambling since Nov. 16, the day of her diagnosis.

“We called everywhere for options,” Yousef said. “We came across a private clinic in Houston after a lot of consultation and research. They’ve had success in the past with this diagnosis. It’s the only place so far that’s given us some sort of hope that this is a curable situation.”

He said Louissa was on her third day of treatments in Houston as of Thursday (Dec. 5). He’s being trained as well with the hope that the couple can soon return home to Destrehan to rejoin their children of 11 and 8 years old. Their third child, an infant, is with the two in Houston.

“They’re trying to go about things at school as much as they can,” Yousef said. “That part’s been hardest on my wife. She can’t stand to be separated from them.”

The hope, he said, is to be able to dispense treatment on their own to the point where they can limit trips back and forth to Houston to once every two weeks.

The family has had a great deal of support from both their immediate family and friends and those beyond in the community. A GoFundMe page (titled Louissa’s Support Group) raised more than $17,000 in a little more than a week, the funds set to go toward her treatment and medical expenses. Because of the severity of the issue, she was advised to begin treatment immediately upon her discharge from the hospital following surgery, so the family hasn’t had much in the way of time to plan things out.

Yousef said the support has been overwhelming.

“We’re still so lucky,” he said. “Everyone is stepping up in such a big way. Our kids’ friends and their families, they’ve been so amazing … calling us, checking to see how we’re doing and offering all the help they can afford. We’re just blown away by it.”

While surrounding parishes have made different decisions, St. Charles Parish officials have decided to keep the parish’s spray park closed for the time being. […]

Hahnville grad dominated on the mat and football field

Barbara Simpson Bergeron, 73, a native of Huntingdon, Pennsylvania and resident of Paradis, Louisiana, passed away on Saturday, June 27, 2020. Barbara is survived by her husband of 47 years, Freddie Bergeron; children, Vickie Maloney, […]