A dance teacher for more than 30 years and teacher at Ethel Schoeffner Elementary for the past 25,  Micque Voges has made a positive impact upon the lives of so many of her students. A recent act of kindness just goes to show how appreciated she truly is.

Voges was nominated by several parish residents and ultimately chosen to be the recipient of Today’s Car Care’s Christmas giveaway, in which the Luling shop handles repairs for one local resident free of charge.

Not only did Voges receive the most nominations, but each person who did so detailed their reasons for doing so and what the teacher meant to them.

“We received several nominations this year, but Micque received an overwhelming 21 nominations,” said Today’s Car Care’s Bailie Bourg. “Each person took a lot of time to express how much she means to them and why she is so deserving … This is our favorite thing to do because it’s really using our skills to help make a difference for others”

Voges said she was overwhelmed to hear the news, and the repairs were indeed needed — she said her car had often left her stranded. Perhaps even more touching to her, though, was the number of heartfelt letters and notes that were sent on her behalf.

“I’ve truly been blessed in my life with so many wonderful people,” Voges said. “There is a tremendous amount of goodness and kindness going on in our community. Words can never adequately express my sincere appreciation to Galen and Today’s Car Care for offering such a wonderful and thoughtful gesture. Their kindness has made such a huge difference in my life.”

She said a great deal of stress has been taken off her shoulders, knowing she and her daughters can now travel safely.

“I would have never been able to take care of all of the parts they fixed on my car by myself. I will forever be grateful to everyone who made this possible,” she said.

Voges began dancing at the age of five and by the time she was in high school, she knew she wanted it as a central part of her life.  She’s done exactly that as a certified dance instructor. She teaches at Kelli’s Kreative Dance studio in Destrehan, but she also is well-known for her work with the Desty Darlings dance team at Destrehan High School. 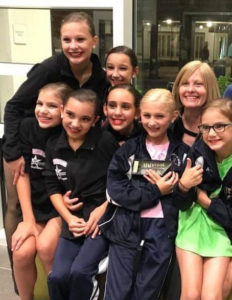 As the team’s director since 2009, she’s helped guide the Destys to two state championship wins, both coming in years the team finished nationally ranked in the top 10.

“One of my favorite quotes that the girls hear from me all the time is ‘You get out what you put in.’ We can’t control judges’ opinions or what place you come in, but we can control how we prepare and perform,” Voges said.

That philosophy of being mentally strong in the face of outside influence is something she’s seen results from firsthand, as Voges was a nationally award-winning dance competitor herself.

“I am so humbled and overwhelmed to have received the Christmas giveaway.” – Micque Voges

It takes time and it takes sacrifice, she says, but the rewards that come from it far exceed any championship trophy.

“My expectations of the girls are exceedingly high,” Voges said, “but the girls continue to meet them each year. These girls have accomplished what they have as a direct result of their work ethic and dedication.”

For Voges, it’s about helping people maximize their potential and exceed their own expectations of what they’re capable of.

“Nothing’s more rewarding to see as a coach,” Voges said. “I just try to reinforce that passion and a strong work ethic will take them further than just talent alone. My hope for them is to have no regrets by performing to the best of their ability at every practice and performance.”

Back on the Road thanks to Today’s Car Care