Sheriff says 2017 rate second lowest in his time in office

“I am pleased to announce that 2017 crime statistics in St. Charles Parish reflect the second lowest crime numbers since I first took office in 1996,” Champagne said. “These numbers, however, do reflect a 6.89 percent increase over our 2016 crime statistics, which was our lowest and best year since 1996.”

“When you hit an all-time low after 21 years, it is tough to improve upon,” Champagne said.

But Champagne said the numbers reflect the parish’s low crime rate, as well as serve as a guide toward directing the best use of services. 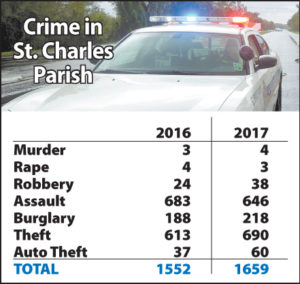 ,” he said. “Overall, I am very pleased with the low crime rate we continue to provide to St. Charles Parish residents. We will always strive for improvement.”

But the sheriff expressed concern about how the state’s early release program might have affected these statistics.

“I am still unsure what effect the governor and Legislature’s Criminal Justice Reinvestment Act, which authorized the release of literally thousands of allegedly nonviolent offenders across the state during the past few months, has had upon our crime rate,” Champagne said. “I am concerned about this and the role it may have played.”

A snowman wearing a face mask … it could only make perfect sense – and a perfect Christmas card – in 2020. […]