Hitting a near 30-year low in unemployment, St. Charles Parish’s economic indicators are among the strongest in Louisiana.

The 2019 unemployment rate fell to 4.1 percent or about 1,206 people, Faucheux said. Of this total, sectors with the most unemployed included construction and extraction, 224, followed by transportation and material, 170; production, 156; office and administrative support, 100, and management, 95.

Despite these numbers, the parish’s unemployment rate trended below the state level at 4.6 percent and New Orleans metro area at 4.2 percent for the year. 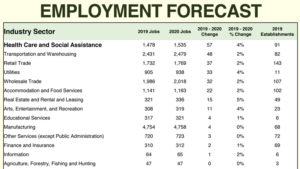 The report also projects parish employment will grow by 114 new jobs in 2020.

In wages, construction is the largest factor in job growth and wages.

“It was just announced that St. Charles Parish has the second highest household income in the state of Louisiana,” Faucheux said. “In fact, it’s about $20,000 more than the state average.”

Hourly, construction pay was $19.49 an hour based on 2018 median earnings, ranking among the highest in wages in the parish. Other high payers by the hour included management at $40.55; production occupations, $27.15; business and financial operations occupations, $25.86, and installation, maintenance and repair occupations, $13.93.

Faucheux said the parish’s housing market was also a strong economic indicator in 2019.

“The local housing market is a strong sign of the health of the local economy,” he said.

The parish’s taxable income, another strong indicator of a healthy economy, is projected to reach $1.8 billion in 2019, Faucheux said.

“Business and industry make up the lion’s share of this number,” he said. ‘This means more sales, more jobs and more high paying jobs. This leads to strong GDP growth.”

Additionally, the parish ranked second in GDP growth at 22 percent for 2018, substantially higher than state GDP at 7.6 percent. It was only higher in Red River at 37.4 percent.

After what was described as an overwhelming and unprecedented public response by St. Charles Parish communications director Samantha de Castro that led to walk-up donors being turned away at its July 8 blood drive in Luling, two more drives have been scheduled in August. […]

Faith was what guided Al Cutno through his darkest time.

The LaPlace man faced death while serving his country Vietnam as a member of the U.S. Army’s Green Beret Special Forces, spending a tour there each year spanning from 1963 to 1968. Thousands of American troops were killed in the conflict. […]

Destrehan man on a mission to stop neighborhood flooding

Walter Pilie, a Destrehan resident of Ormond Plantation Estates for 34 years, has made it his mission to do whatever he can to get his and other neighborhoods in St. Charles Parish to stop flooding. […]