Hypolite Nazio thought maybe someone was pulling his leg. It sounded too good to be true.

But the relief was very real, and perhaps just in time.

After many weeks of camping outside their damaged home, the Nazio family was offered a trailer to live in, a gesture that came completely unexpected.

“I heard him say something about giving us a trailer, and I thought, ‘Wow, that doesn’t sound right,’” Nazio said. “I told my wife and she asked about when they would want it back … no, I think they want to give it to us, to keep. She said the same thing I did.

“But I called them back and he said he could have it to us in an hour and a half. I could have never imagined.”

The beginning of Nazio’s story is an all too familiar one over the past few months – his Paradis home was wrecked by Hurricane Ida, leaving Nazio, his wife and their three children to look for a Plan B.

That’s where their tale turns into some unique territory, however: upon returning from evacuation in Texas and learning that their home would be unlivable for the foreseeable future, the family made the decision they would live in tents outside of their home before figuring out a permanent solution. That’s exactly what the Nazios have done since Ida.

An outdoorsman at heart, Nazio downplayed the rough conditions and even noted his children looked at their situation as “a big camping trip.” But the weather was getting colder, and attempts to shore up a more stable living arrangement were seemingly running into a dead end. 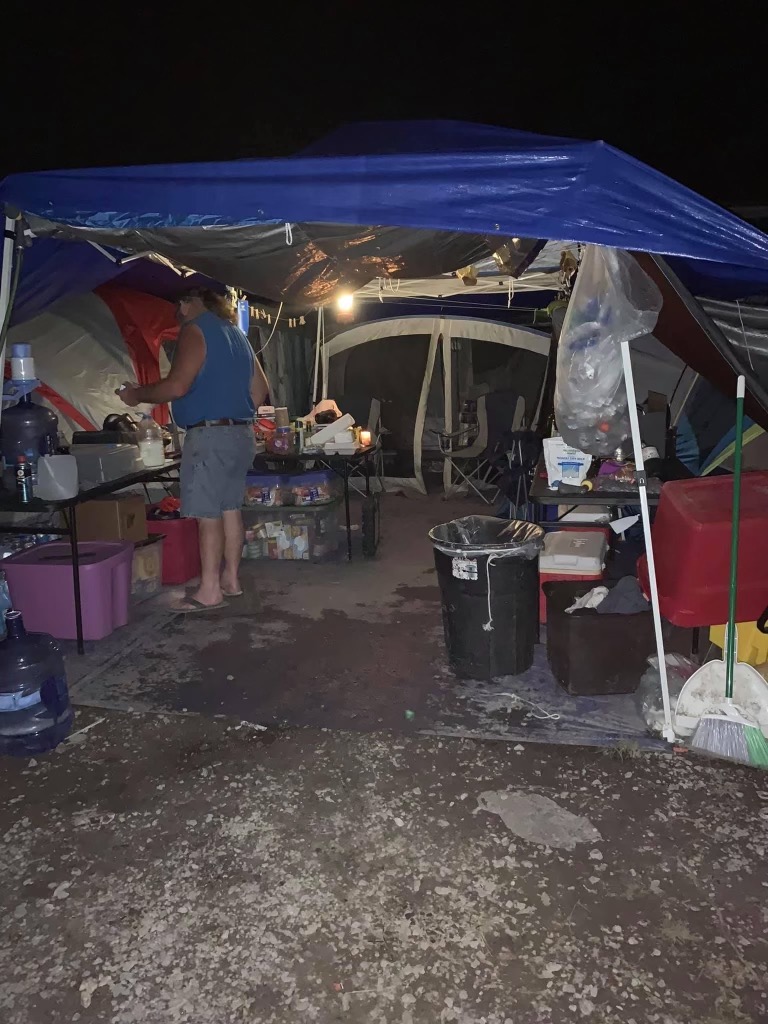 “I kind of felt like I was getting the runaround,” Nazio said of his application for a trailer. “We applied … after a month, FEMA said the state was in control of that and it wasn’t in their hands anymore. Then I called the state and was told if I didn’t hear anything by the following Tuesday to try back. We couldn’t get any kind of time frame on how long it might take to get a trailer.”

One day, Nazio was speaking to the pastor of his church – venting, as he described it – and spoke of the family’s uncertain situation. The latter decided to make a few calls, including to several news outlets, to attempt to shine some attention on the Nazios’ situation, and secure some help along with that.

A Twitter post about the situation by FOX 8’s Josh Roberson caught the attention of Matt Rookard of the Terrebonne Economic Development Authority. The post included photos of the Nazios’ home and their temporary “tent village” living quarters. Rookard’s group used its connections to secure a trailer for the family, which the Nazios moved into in early November.

“I sure wasn’t expecting it,” said Nazio. “I felt like I was running into dead end after dead end … it kind of brought me back. I was starting to lose my faith in humanity a little bit. You’re looking for help and just getting the runaround. But they restored it.

“It’s definitely warmer in the trailer. And a hot shower, that’s even better.”

Prior to the trailer, the tents were no short-term arrangement. The back end of the roof on Nazio’s home was completely blown off by Ida. A power pole had been ripped from the ground and was on the back of the house. And the storm shifted the home entirely off of its base.

When another storm came through after Ida, it caused further damage, both to the family’s home and its temporary setup.

“That night kind of broke me, I’m not going to lie,” Nazio said. “I dropped down and prayed, I asked God, ‘please, if we have to live in these tents for years then OK, but please don’t let us lose everything again. I just want my family to be safe.’”

Knowing a cold front was coming in, Nazio tapped into some creativity, gathering pallets to create a platform to lift the tents off of the ground.

“It was to make it a little bit warmer,” he said. “We were sleeping on air mattresses inside the tent. But the air from the ground makes the air in the mattress colder.

“We made it work. It was rough sometimes, when the weather would change. We didn’t get to the point of, ‘Well, we can’t live like this.’ We hadn’t gotten to that dire point yet where it was too cold, we have to do something else … but that was likely coming.”