Last week, Chantelle Simoneaux of Norco found a unique – and inspirational – item outside her home.

She held in her hand a piece of wood cut cleanly from a tree with an inscription carved on its surface: Norco Strong Hurricane Ida 2021. Simoneaux took to Facebook to learn who had left the item, and she soon learned she was not the only person to find the uplifting message.

It was her neighbor Chris Kimble who made that item and several more, dropping them off at the homes of various neighbors in an effort to raise their spirits in a difficult time.

“I saw all these trees down in front of people’s houses and, you know, this was a historical event,” Kimble said. “The worst storm since 1850, it’s said. I have a machine that I’ve been able to use to make signs for people in past years. So, I’ve got this equipment already. And I remember in the past, you had those messages like Lafayette Strong, things made for people to remember and hold onto, maybe to pass down to their grandkids. So, maybe I can do something to help out my neighbors.”

Kimble collected tree branches from his neighborhood and went to work for what he thought would be likely be a brief project, then dropped the finished product door to door. 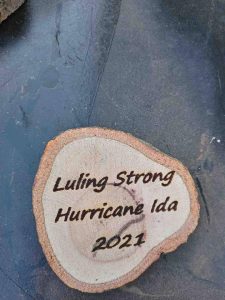 It was not that brief. Simoneaux’s Facebook post drew nearly 300 likes and over 100 comments. The thread of responses directed her to Kimble, but the majority were made for a different reason. People wanted their own keepsake, and not just people in Norco.

“She saw me and asked about it,” Kimble said. “She let me know there were a number of people who said they’d like one.”

He began carvings of St. Charles Parish Strong, Paradis Strong, Luling Strong, Destrehan Strong and LaPlace Strong among the signs made to fulfill the requests. He would sell each for $5, with a discount to those ordering three or more. A second post by Simoneaux to gauge orders brought almost as many replies as the first.

“She said she had orders for 86 of them,” Kimble said. “I was taken aback by such a large number so quick. I was definitely not expecting that. There have been a lot of Norcos … really just about every (nearby) town, and even parish-wide. St. Charles Strong, St. John Strong, everybody representing their own town.”

Between collecting, cutting and sanding the trees and putting the finishing touches on, the task isn’t that physically demanding, though it is time-consuming.

“But I’ve got nothing to do right now,” said Kimble, who said while his Clayton Drive neighborhood was devastated by Ida, his home was relatively unscathed compared to others. “If this can make people a little happier and things a little better right now, then why not?”

Hahnville falls in opening round shootout

It wasn’t at all what Hahnville envisioned.  […]

Many would likely deem the past two-plus years as unpleasant – COVID-19, followed by Hurricane Ida, has altered lives.  […]